He still hasn’t been officially nominated as the Democratic candidate for president yet, but Barack Obama has taken control of the Democratic National Convention, trotted out a cheesy knock-off of the presidential seal, and now, like a Euchre player leading with off-suit ace, he’s played the race card early by stating Republicans will use his race against him.

“They’re going to try to make you afraid of me. He’s young and inexperienced and he’s got a funny name. And did I mention he’s black?”

“We know the strategy because they’ve already shown their cards.”

Have they really?  Or is this a new example of what David Brooks calls the two Barack Obamas?  I’m inclined toward the latter.  Nothing I’ve seen implicates John McCain or the Republican party in racially oriented politics.

In fact, Mike Huckabee, McCain’s best bet for vice-president, recently wrote that Republicans needed to attack Obama specifically on issues of substance and not engage in personal attacks.

I think what we have here is an example of Fast Eddie Obama trying to pull a sucker-punch off on McCain before the bell rings to start the fight.

“Anyone who opposes me is a racist” is the mantra of the Obama campaign and it’s a line that has already worked wonders against the now-vanquished Hillary Clinton, a candidate far superior to Dr. Barack.  Now it’s McCain’s turn to counter the one charge that no white candidate can refute.

He shouldn’t try to do so.  Huckabee’s suggestion seems to be the right one.  Obama would pull us out of Iraq before the job is done, endangering Iraqi lives and the tenuous progress made there as a result.  He would increase spending at home without balancing the expenditures by implementing the necessary increase in taxes, even as he doubles the capital gains tax, a sure-fire net loss for the government.  He would appoint Supreme Court justices who would further a liberal agenda that’s out of step with the American people.

These are legitimate reasons to vote against – and yes, even fear – an Obama presidency. 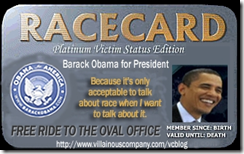 Making Sense of the Game

3 thoughts on “Barack Obama Leads With the Race Card”