What could be more American than a Christmas tree in December?  Apple pie in July, perhaps.  But politically correct librarians and at least one mid-level bureaucrat in administration at the University of North Carolina don’t seem to think that Christmas is something to celebrate and have banned the university’s decades-old tradition of displaying Christmas trees in the school’s libraries.  Can the Grinch have infiltrated UNC’s upper management?  Seems no one there has a heart, be it ever so tiny.

The trees, which have stood in the lobby areas of Wilson and Davis libraries each December, were kept in storage this year at the behest of Sarah Michalak, the associate provost for university libraries.

Aside from the fact that a UNC Chapel Hill library is a public facility, Michalak said, libraries are places where information from all corners of the world and all belief systems is offered without judgment. Displaying one particular religion’s symbols is antithetical to that philosophy, she said.

“We strive in our collection to have a wide variety of ideas,” she said. “It doesn’t seem right to celebrate one particular set of customs.”

It doesn’t?  What if those customs are what built the country that your school resides in?  What if those customs form the core of what is quite frankly one of only a handful of nations in the world worth living in?  And what if those quaint, discardable customs created the Constitution that grants you the freedom to denigrate the beliefs of the overwhelming majority of your countrymen and deny them the right to affirm their faith as their forefathers – and yours – did?

A few years ago I worked at a company where the president personally gave me a little white towel emblazoned with an image that epitomized the organization’s philosophy.

“If you ever hear someone in this company spouting a line of bullshit I expect you to throw down this towel and call them out on it immediately,” he said in his cool Australian twang and gave me a wink and a slap on the back so that I would know he meant it. 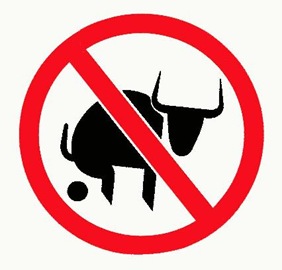 It’s unfortunate he’s not in leadership at UNC, because someone with a little courage and a little authority there needs to call bullshit on the overly politically correct, mean-spirited, anti-Christian, anti-American librarians, tell them to shush, and pull the Christmas decorations out of storage ASAP.

What an embarrassment to the university, its students, and to the state of North Carolina.  If I were the president of UNC – and I wish to God I was – I’d have Ms. Michalak’s letter of resignation on my desk by Monday morning.

In the proper frame of reference, Michalak’s ideas about accommodating a wide variety of ideas on campus are wonderful.  But not at the expense of compromising American traditions and American’s freedom to worship as we always have.

Does anyone in authority at UNC have the guts to say, “Enough of this nonsense.  We do things a certain way in America and that includes celebrating Christmas in our homes, on our streets, and in our businesses and schools.  I will personally make sure that we will continue to do so as long as my watch continues.”

The Observer’s poll of nearly 8000 readers shows that 96% of North Carolinians say that public libraries should host Christmas displays during the season.  96%.  That’s a pretty convincing indication of what local citizens want, don’t you think?

If you’re in the 4%, I’m sorry to have to be the one tell you this.  But like I said a while back, common sense and common courtesy both dictate that you should put your right to use legal force on ice and look the other way for a couple of weeks while 96% of your fellow Americans celebrate the birth of Jesus Christ.

God knows we have to put up with enough of your B.S. the other 11 months of the year that you ought to leave our right to celebrate as this country has always celebrated alone.

Of Youth and Discipline