The Houston Chronicle says that U.S. automakers will be getting $15B in "emergency loans" and a new boss in Washington D.C. in the form of a "car czar" who would have to power to force GM, et al, into bankruptcy if the companies fail to reduce labor and financial costs in a timely manner. 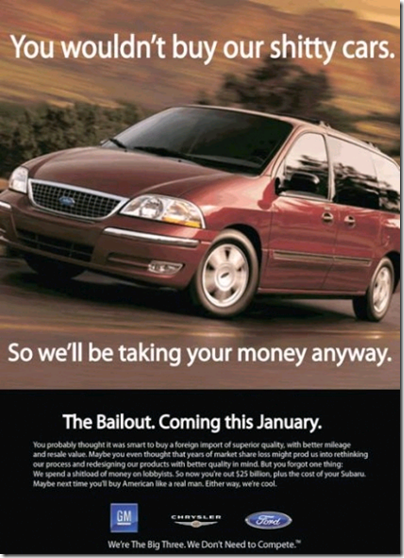 Republicans are feeling left out of the process are talking tough about slowing down or stopping the proposal from being enacted.  Mitch McConnell, Senate minority leader, is among them.

“Republicans will not allow taxpayers to subsidize failure,” McConnell said, although he added that the auto situation would be addressed by the end of the week.

That may be; however, how can McConnell explain the massive bailout of financial companies, a corporate welfare blockbuster that is at minimum an order of magnitude larger than what has been proposed for automakers?  Rhetoric aside, subsidizing failure has become the order of the day.

At least the proposal Democrats and the White House have agreed on provides for the possible – inevitable? – bankruptcy of the automotive giants.  Short of massive, voluntary wage reductions on the part of the UAW and other unions, I fail to see how any other outcome is possible.

Dawn Johnsen: Another Lying Liar in Line for an Important Job with the Obama Administration

What Kind of Republican Are You?