For a brief moment it appeared as through Harry Reid was going to make a stand on principle, namely that he would not stand for corrupt Illinois governor Rod Blagojevich’s ill-advised appointment of one Roland Burris to the august body that is the U.S. Senate.  Now it appears that Reid will back down yet again, something that puts even the ultra-liberal Jane Hamsher to the task of mocking his obvious lack of fortitude.

Moreover, there’s sure to be lots of clowning around in Harry Reid’s house now that Al Franken has all but locked up victory in his race against Norm Coleman.  I shudder to think at the influence the sarcastic but quick wit of Minnesota’s presumptive junior senator will wield in a Democratic wing of the senate given its obvious lack of leadership.

Franken – whose election victory has reportedly been achieved through a series of voting irregularities that would be trumpeted as crises of democracy had they occurred in Rwanda, Nigeria, or the like – in some ways epitomizes the American dream, for it’s evidently true that anyone can become a senator, in the right time and place.  Unfortunately, Minnesota, land of political opportunity for aging professional wrestlers and washed up comedians, is home to just the right circus atmosphere.

To make things that much worse, Harry Reid has said that he plans to lead the senate until 2015, a quasi-ballsy statement that leaves me flabbergasted at the prospect of 6 more years of this: 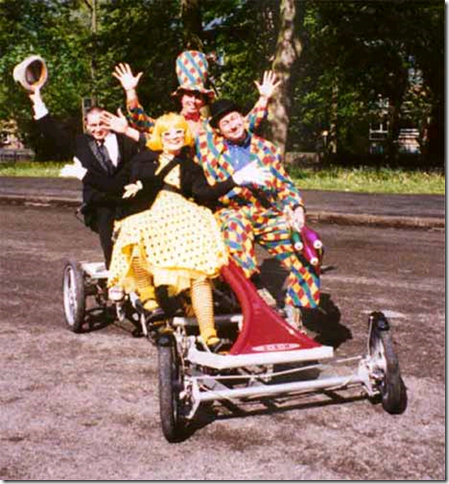 Good thing that he doesn’t work for Barack Obama.  I’m sure the new president thinks so; it wouldn’t be much fun to have to supervise these clowns every day.

Clinton Scores, but Not Enough