Barack Obama doesn’t think so, but The Question has to be asked about his new Secretary of the Treasury, doesn’t it? 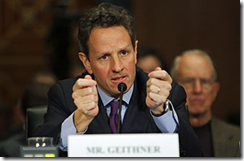 Will Tim Geithner turn into an archetypal “do as I say, not as I do” bureaucrat and strictly enforce the tax laws he was personally unable to comply with or will he turn a blind eye to others who follow in his footsteps?

New York Federal Reserve Bank chief Timothy Geithner was sworn in as President Barack Obama’s treasury secretary despite tax problems that might have sunk his nomination in less desperate times.

Evidently the thinking is that we’re in bad shape economically so we’ve got to sign up the first guy in line to take the job with very few questions asked.  But sloppy vetting usually yields equivalent results.

I liked the doubt that Fred Barnes expressed about Geithner last week, which was that we’re all supposed to believe that some guy we had never heard of before last month is absolutely essential to our country’s economic future and just fall into line behind him?

I’m not buying it either.

Hopefully Geithner will rise above what can only be his own carelessness or lack of ethics and earn our trust.  If so, it will be after digging himself out of a negative equity confidence position.

Fall Back, to What, Exactly?