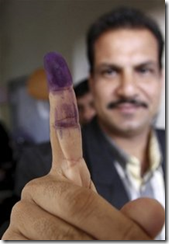 Iraq’s provincial council elections went off smoothly under the watchful eye of the military, the BBC reports, and the country’s Sunni minority turned out in force this time after boycotting similar elections in 2005, losing political representation as a result.

The head of the Iraqi electoral commission in Anbar province – a centre of the Sunni resistance to the US occupation – said he was expecting a 60% turnout.

Security was tight as voters had to pass through stringent checks.  Aiding the effort were thousands of Iraqi women who helped ensure traditional garments could not be used to disguise explosives.

Reports indicate that while some irregularities took place the election was for the most part run smoothly.  Even so, some Iraqis still have reservations about the process:

A Shiite lawmaker, Nassir al-Saadi, also found the election process generally good, but noted the real test is yet to come: how the major political bloc perceive the outcome.

Superficially that may seem true.  However, the fairness of an election has nothing to do with whether parties, whether large or small, are happy with the outcome, a lesson some Iraqis evidently still need to learn.  That at least some of those are elected officials themselves is a little disheartening.

On one level it’s thrilling to see democracy taking hold in a country that’s never had a legitimately representative government.  On another, a nation isn’t truly free and functioning until such elections can be held without the presence of soldiers at polling places.  That’s the measure of how far Iraq still has to go.

Iraq, a Rock, it’s All the Same

Diplomats Say "No" to Iraq