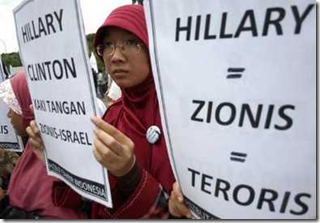 Don Surber puts it this way:  “Hope.  Change.  The world still hates us.”

No surprise, given that nothing has really changed.  Moreover, nothing can change in the space of a month or even a presidential term, regardless of what’s promised.

Nor should the United States change its policies on iota to placate Indonesian Muslims, particularly given that group’s inability to behave rationally in their own country.

A group of 500 Muslims wrecks havoc and spreads panic in Masohi, chief town of Seram, part of the Maluku Islands, during clashes with police and local Christians with the result that 45 houses, a church and a village hall are set on fire.

The spark that set off the violence is an in incident in which a teacher allegedly insulted Islam in front of some Muslim students.

From one perspective, the key word in that sentence is “allegedly”.  We know from real-world experience that it’s paid educators who lie and slander while teenaged youth are ever so truthful, whether Indonesian or American.  Was the children’s claim proven?  Was the proof presented in a recognized court of law?  Was sentence handed down by the proper officials of the court?  Highly doubtful on all counts – that’s not how radical Muslims roll.

From another perspective, the teacher’s words are completely immaterial.  What if (s)he did insult Islam?  What of it?  A religious philosophy that demands a violent physical response to words is an insult to both the rational world and the God said religion claims to worship.  Yet many young Muslims define Islam exactly in this way – a justification to attack those who refuse to submit.

It goes without saying that Indonesian Muslims are hardly unique.  This was recently demonstrated clearly in Afghanistan:

When Ghaus Zalmai, a well-known journalist who was working as spokesperson for the attorney general’s office, lent his name and reputation to a new version of the Koran, he may have thought he was performing a service for his fellow Afghan Muslims.

Instead of thanks, the Afghani rabble howled for Zalmai’s head:

Critics say that in the process, serious errors were made in rendering the letter and the spirit of the Koran, and are calling for everyone involved in its production to be brought to trial. Angry demonstrators in Kabul, Jalalabad, and other parts of the country have even demanded death for Zalmai and his “collaborators”.

This is the face of political Islam and it’s going to be coming to a country near you – perhaps very near – unless western leaders do a sudden 180-degree turnabout and start showing some backbone at home and abroad.

Think Britain will lead the reversal?  Not bloody likely!

Pushing Back on Islam