Mark Steyn tries, probably in vain, to point out to Gen Y’ers exactly what their support for Barack Obama’s big-spending ways will mean to them and their children.

We want to help the sick and heal the planet by voting for massive unsustainable government programs. Like the young, we’re still finding ourselves, but when we find ourselves stuck with a medical bill or a foreclosure notice it’s great to be able to call home and say, “Whoops, I got into a bit of a hole this month. Do you think you could advance me a couple of trillion just to tide me over?” And if there’s no one at home but a couple of second-graders, who cares? In supporting the political class in its present behavior, America has gone to the bank and given its kids a massive breach-of-trust fund.

Just a little something to thank the powers-that-be for, kids.  Sorry, but I did my best to make things go the other way.

Speaking of which, Glenn Reynolds has some incredible photos from the Cincinnati Tea Party where approximately 5000 people showed up to protest Mr. Obama’s massive expansion of the government debt – well over $1T of new debt in the next fiscal year alone.

I especially love this one that speaks directly to the point that Steyn made in his article, that it’s the children who will have to pay for the excesses of our current leadership: 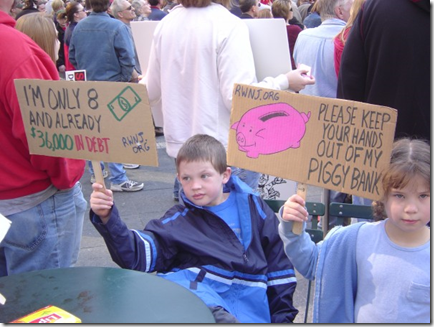 Good for you folks who both took it to the streets and kept it peaceful today.