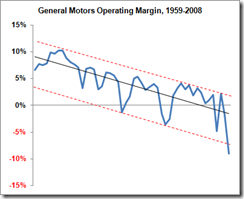 Nate Silver’s picture is worth at least a thousand words when it comes to communicating how long GM’s financial troubles have been brewing.  Silver also gets the reason behind the company’s demise right: the costs of GM’s retiree pension and health care programs.

On one hand it’s easy to look back to 1950 and second-guess GM’s management for making the decision to pick up the costs for employee’s medical costs and retirees’ pensions.  But as we know it was all but impossible for those executives to foresee the massive increase in health care costs that would accompany government entitlement programs and the increasingly litigious social environment they helped create.  On the other, it’s a wonder that it took labor unions so long to finally destroy one of the greatest companies in American history.

GM began its slide down the slippery slope in 1950, when it began picking up costs for medical insurance, pensions and retiree benefits. There was huge risk to GM in taking on these obligations — but that didn’t show up as a cost or balance-sheet liability. By 1973, the UAW says, GM was paying the entire health insurance bill for its employees, survivors and retirees…

And out-of-pocket costs for health care are eating GM alive.

It’s difficult to get a precise figure on these so-called legacy costs, but they averaged about $7 billion per year between 1993 and 2007 and are probably at least $10 billion per year now. Considering that GM has never made as much as $10 billion in profit in a year and that its entire operating losses in 2008 were $13.8 billion, you can see why this is a significant problem.

Unlike politicians who can simply print money or encumber future generations with debt, companies like GM have to deal with the world as it actually is – harsh, brutal, and unforgiving of mistakes.

GM’s capitulation to the UAW’s demands is clearly a fatal mistake when seen through the 20/20 vision of hindsight.  The question of what Detroit’s automakers could have done differently is nearly moot from a financial perspective.

Yet it’s very relevant to a country that faces at least 3 years and 9+ more months of Barack Obama’s fashionably liberal policies.  Unionization was a messy business in the post-WW II era and violence, usually originated by labor in response to companies’ refusals to give in to their demands, was if not commonplace at least an ever-present threat during contract negotiations.

60 years ago GM gave in to the threats and intimidation of labor unions.  Now the company stands at death’s door, it’s CEO ordered to resign by a politician who hadn’t even been born when the company made the agreement that would prove to be its undoing.

Unionization is by definition anti-competitive, for unions’ first priorities are create a labor environment in which employees’ job security is substantial and wages and benefits are fixed above market value.  This leads directly to higher costs and decreased quality as the entitlement mentality spreads through the workforce.  Taking benefits away from union employees is like trying to take candy from a baby whose private bodyguard is a mean S.O.B. named Uncle UAW and who carries a pair of brass knuckles in his pocket.

The result is inevitable.  As the Financial Times notes, “Healthcare costs alone account for a gap of $1,500 between the price of a Detroit vehicle and a Japanese one, and are the main reason Detroit cannot compete with the Japanese on lower-margin small cars”.