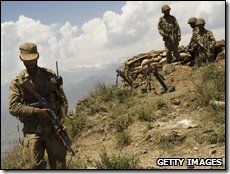 Not long ago we were worrying about Pakistan’s apparent lack of will to grapple with its Taliban problem and wondering if the government there – and the nuclear weapons it controls – would stay in power.  Now Pakistan’s army is going house-to-house in Mingora to root terrorists out of the Swat valley’s main city and having success.

“This is an extremely difficult, extremely dangerous operation, because clearance has to be done street by street, house by house.”

So how is it going?  Pretty well, according to reports.

One has to take these numbers with a grain of salt.  But it appears that Pakistan is doing very well against the terrorists, which leads me to question if the Taliban weren’t deliberately lulled in to a false sense of their own strength by the government in Islamabad.

Doubtful.  Nevertheless, the effect at the moment is the same, whether through dumb luck or brilliant bluffing, the Taliban is exposed and being pounded for it.

According to the BBC, “The [Taliban] spokesman also said the Taliban would fight the security forces to their last breath.”

One can only hope.