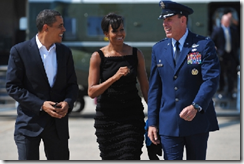 Sometimes I have to wonder why people think they need to have an opinion on everything.  Case in point: A man took his wife to the theater in New York and the Republican National Convention felt it necessary to respond critically to this act of kindness because the man was Barack Obama.

“As President Obama prepares to wing into Manhattan’s theater district on Air Force One to take in a Broadway show, GM is preparing to file bankruptcy and families across America continue to struggle to pay their bills,” RNC spokeswoman Gail Gitcho said in an email this afternoon.

With thinking like this, it’s small wonder that this organization’s “product” has been two crushing defeats in as many election cycles.

News flash: American families have always struggled to pay the bills, even at the height of economic prosperity.  And GM was doomed to bankruptcy decades ago.  That it’s happening now is a nice coincidence given Mr. Obama’s anti-business agenda; however, the seeds were sown before the new president was even born.

If there’s a story here – and there ought to be – it’s that GM’s death knell was struck the day it gave in to the unions’ demands for higher-than-market-value wages and benefits.  The result was GM’s promise to provide life-long health care to retirees, an agreement that makes the company impossible to operate profitably now, a fact that makes it a perfect target for Democrat’s de facto nationalization.

Obviously none of this has anything to do with First Lady Michelle Obama collecting on the promise of a night out from her husband, which is the whole point.  The RNC should simply shut up and be thought fools rather than speak and leave no doubt.

Another One Ought to Bite the Dust

What Sort of "Ism" are You?