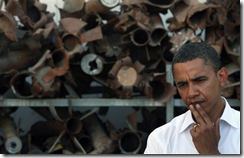 In Cairo, Barack Obama said something that’s both singularly offensive and utterly fallacious when he stated that “one of the points I want to make is, is that if you actually took the number of Muslim Americans, we’d be one of the largest Muslim countries in the world.”

Taking the inaccuracy first, estimates vary but there are believed to be 7-8 million Muslim Americans, placing the U.S. in around 30th position worldwide – hardly among the leaders.

Moreover, Obama’s statement is also a slap in the face to American Christians, coming as it does from the leader of a political party whose platform is hostile to the religious beliefs of the vast majority of citizens.  Where was this Crusade-worthy rhetoric during the campaign?  Carefully hidden away, obviously, though perhaps it burned on the lips of the now-invisible Joe Biden on occasion.

But let’s not make too much of this; it’s obvious that Mr. Obama was merely trying to ingratiate himself to the Muslim audience as he makes the rounds in the Middle East.  Moreover, the U.S. does, as mentioned, have a somewhat sizable Muslim population, albeit one without significant political power at the moment.

More important is what Obama, in language perhaps too subtle to be heard by Islamic terrorists in the region, had to say later:

“I think the most important thing I want to tell young people is that, regardless of your faith, those who build as opposed to those who destroy I think leave a lasting legacy, not only for themselves but also for their nations,” Mr. Obama said. “And the impulse towards destruction as opposed to how can we study science and mathematics and restore the incredible scientific and knowledge — the output that came about during centuries of Islamic culture.”

I want to make two points about this statement that I think are significant.

First, it is certainly true that, at times, great progress was made in the Islamic world.  Unfortunately that progress effectively ceased centuries ago.  Too many Muslims are trapped in countries and cultures that deliberately restrict their access to education, information, and freedom of choice.  And too many of its young people are channeled into a bloody, ill-advised, low-level war against western culture.

It’s exactly this terrorism that Obama refers to as an impulse toward destruction, although I would argue that young terrorists are guided toward their murderous acts rather than acting on impulse.

What Obama is trying to communicate is that in order for Islam to be a stable and legitimate contributor to world culture its new generation has to accept that the current leaders’ violent tactics and repressive legalism has to be eliminated.  While it’s a long shot taken early in an ongoing process, it is perhaps worth allowing the president a few meaningless rhetorical deviations from our national reality in his attempt to better a troubled region of the world.

Second, it’s interesting to note that the the left’s own intellectual tactics are not unlike those practices by Islamic leaders in their efforts to quell education and freedom of thought and speech.

It is increasingly important for those who care to get ahead, particularly in the realms of politics, public service, and higher education, to adhere to a standard of political correctness that at times requires a denial of the truth and always requires the repression of certain inconvenient facts.

These demands for compliance in thought and deed are typically enforced with so-called “soft consequences” such as denial of opportunity, censure, termination of employment, and others rather than the imprisonment, torture, and execution of social and political dissidents in other parts of the world, notably in many Islamic countries.

Nevertheless, the hypocrisy of the American left is undoubtedly not lost on Muslim leaders, some of whom correctly think that the U.S. can be brow-beaten into further compromise with Islam by a combination of continued terrorism around the world and the demands our system of politically correctness, demands that deny us the ability to reject ill-advised and anti-American ideas.

Third, the American education system should never, repeat never, be held up as a model for any nation or culture to aim for as its pinnacle of achievement.  Our system is flawed in so many fundamental ways that it is virtually unfixable given the pervasive changes that are needed to bring it to a par with the rest of the western world and the implacable hatred political stakeholders have for the needed improvements.

That’s why McKinsey & Company said, in its report “The Economic Impact of the Achievement Gap in America’s Schools”:

“Several other facts paint a worrisome picture. First, the longer American children are in school, the worse they perform compared to their international peers.”

The longer kids are in school and the more money we spend on them, the further behind they get.

That’s the end result of a broken system, one whose faults can largely be traced back to a finite set of leftist principles that have infested our nations schools and created an environment in which real learning is essentially impossible for most students.

While our system of education is undoubtedly better than what’s in place in Egypt and many other Muslim nations, there are many others that such countries would be better off modeling any future reforms after.

In sum, an average American education would be a wonderful boon to most children in Cairo.  Unfortunately, the message of enlightenment that Barack Obama hopes to convey to Muslims in the Middle East is diminished by our imperfect adherence to the principles of freedom of speech and individual rights that the U.S. pioneered.  In addition, our failure to implement pragmatic public policy that achieves the desired results in education and other areas makes Obama’s message about scientific and cultural progress less than convincing.

Perhaps this would be an opportune moment to consider the plank in our own eye in addition to others’.