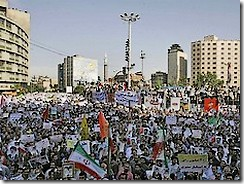 Two days ago I riffed off of the American Declaration of Independence and wrote that all people, in every nation around the world, are born with the inalienable right to elect their own government.  Those familiar with this document – arguably the greatest piece of political writing ever – know that it also emphasizes this essential language:

Governments are instituted among Men, deriving their just powers from the consent of the governed, — That whenever any Form of Government becomes destructive of these ends, it is the Right of the People to alter or to abolish it, and to institute new Government

This right to dissolve the state, as Jefferson well knew, is foremost in men’s relationship with the government.  Elections are meaningless without that final, terminal authority, for what does a vote matter if it can be disregarded or canceled out by stuffing that ballot box?

A government’s rejection of the verdict of its people is its worst possible offense, far worse than mere corruption or incompetence, because such a refusal to bow to its citizens’ authority in an explicit rejection of every single man and woman’s right of self-determination.

This is why so many of the Iranian people are still in the streets, despite the arrests, beatings, and killings that are taking place among them, because the government in power now has actively defrauded them in order to retain that power.

Understand that I realize the demographics in Iran are not as clear-cut as the massive protest makes them seem.  A large percentage of Iranians support the authoritarian rule of Ayatollah Ali Khamenei and the fundamentalist councils that exercise control over the elected officials.  It is therefore quite possible that Mahmoud Ahmadinejad actually did win the election, albeit by a much closer margin than was officially reported.  If I were betting, that’s where I’d place my money.

It’s also irrelevant that Ahmadinejad probably did win.  The Iranian government’s blatant rigging of the election demonstrates its illegitimacy.  Too harsh?  No other word fits a government that rejects the people’s right to exercise control over it.  Indeed, the very structure of Iran’s government, dominated as it is by an unassailable religious cadre, denies the Iranian people the essential right that Jefferson crystallized for posterity in his Declaration.

(Parenthetically, recall that, during the 2008 U.S. primaries, far-left radicals postulated loudly that President Bush would reject voters’ authority and retain power.  Ridiculous asses, these, as Mr. Bush proved by going above and beyond to ensure that Mr. Obama’s transition was seamless.  That’s how it’s done.)

There is no respect for the rights of the people in the Iranian government.  The best proof of this comes from the mouth of one of it’s public officials in what passes for its justice department, Mohammadreza Habibi, senior prosecutor in the central province of Isfahan:

This is the voice of the Iranian government and it does not deserve to rule.  The government is not God.  Ahmadinejad is not God, Khamenei is not God, nor, I dare say, are they of God.  Islamic law exists to serve the people, as Ahmadinejad and Khamenei hold their positions to serve, not to rule.  As Jefferson said, when a government and its laws become a hindrance to the people they are to be set aside.  Moreover, the government is obligated, should it wish to retain its legitimacy, to step aside on request of the majority.

Instead of doing so, however, Khamenei seems to be following the dictator’s handbook by importing foreign mercenaries to maim and murder the opposition in the streets, thus proving my point rather neatly, I think.

The West’s Moral Imperative on Iran

There You Go Again, Jimmy