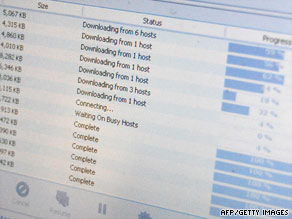 A federal jury convicted Jammie Thomas-Rasset of illegally downloading 24 songs and fined her an eye-popping $80,000 PER SONG in the re-trial of the first such copyright infringement case in the United States.

Attorney Joe Sibley said that his client was shocked at fine, noting that the price tag on the songs she downloaded was 99 cents.

She plans to appeal, he said.

She pretty much has to, given the massive fine, which is utterly ridiculous and vastly disproportionate to the “crime”, such as it was.

Sounds like Sibley didn’t do too good of a job during jury selection; I’d like to think that it would be rather difficult to find 12 Americans stupid enough to levy a fine 8000000% greater than the retail value of the merchandise in question.

The RIAA was smug in victory, admitting no shame over the possibility of bankrupting a family over $24 of its music:

Cara Duckworth, a spokeswoman for the Recording Industry Association of America, said the RIIA was “pleased that the jury agreed with the evidence and found the defendant liable.”

More so, it seems.

Shah and the Case for Isolationism