One of the problems with W’s War in Iraq (Wii – coincidence?) is that it has taken America’s eye almost completely off the ball, which is the global struggle against Islam.

The enemy – and they are a real enemy, in case anyone’s not convinced yet – is not just in Iraq. Or even in Afghanistan, perhaps the most immediate casualty of the Prez’s ill-considered decision to saddle up and charge into Bagdhad like the Light Brigade. Not even in the Sudan where Muslims have perpetrated murder of Stalin-esque proportions.

The enemy is also among us and is beginning to actively use the levers of our system of government against us. Earlier this year the first Muslim was elected to the U.S. Congress in the form of Keith Ellison. Immediately Ellison shocked his counterparts in Congress by insisting he be sworn in using the Koran rather than the Bible.

Not surprisingly the Democrats, from whose bosom Ellison naturally hails, thought this was a swell idea. Here’s a nice picture of Ellison with his pal Nancy Pelosi and Thomas Jefferson’s Koran: 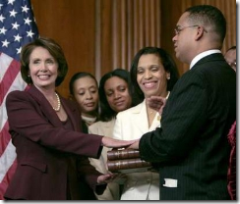 But after an uproar of some proportions the event passed with little fanfare from the media or protest from Americans. What’s one representative? What difference does a book make when we cannot prove either one is true?

Despite what Democrats ignore and Joe Sixpack thinks, there is in fact a difference. Not in the significance of the ritual, which as we all know from watching Congress in action is meaningless, but in principle.

There’s the way we do things in America and there’s the way people do them everywhere else. We do things our way because it’s the right way or as close to it as mere humans can get. People want to be part of this country and come from all over the world to take up the American way. That way of governing and living should not be compromised for anyone or anything, not even Keith Ellison and his remarkable achievement.

More recently, Ginnah Muhammad filed a federal lawsuit against 31st District Court Judge Paul Paruk, alleging he violated her religious rights and denied her equal access to the courts by ruling that she could not testify in her case against a rental car company unless she removed her veil while on the stand (hat-tip to Debbie Schussel).

“I’m a human being and I wanted to come to court to get justice,” Muhammad said at a news conference Wednesday outside the federal courthouse in Detroit.

“When I walked out, I just really felt empty, like the courts didn’t care about me.”

Here’s another cool pic, this time of Muhammad’s costume: 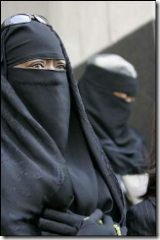 Judge Paruk had the wisdom to deny Muhammad the right to speak in court while hiding behind the layers of cloth shown in the picture. Again it’s a question of how we do things in America: we demand the right to address our accusers and for judges and juries to see the faces and expressions of all parties in the case. We do this because it’s the right way to execute a quest for truth and justice.

“Victims”, their advocates, and the liberals who dredge their ranks for supports all see traditional American rules and laws as suggestions that can be changed as they become inconvenient to needs of the moment. In this moment it’s inconvenient to American Muslims who, some more reluctantly than others, have had to deal with the backlash that followed their less-civilized brethen’s murdering rampages.

Is that all it is? I am beginning to think otherwise. As comforting as it is to believe that Muslims in the U.S. are only running afoul of American colloquisms by accident, I do not believe that is true in all cases.

Keith Ellison clearly had an agenda and undertook the mission to undermine the already tenuous relationship between American government and Christianity with the use of two weapons: political correctness and the Koran. Democrats in power invented the former and pander to believers in the latter. The battle was lost before the first salvo went public.

It’s unknown whether Ms. Muhammad’s stance is politically motivated. Her language as quoted in the Detroit News shows an educated mind behind the words. Probably she is as sincere as she is misguided. Regardless she’s serving as a straight woman for what is or will inevitably become an deliberate, calculated attack on the systems and institutions that govern this country.

Consider Iraq and how few murderous thugs were required to turn that country from a conquered nation into a bloodletting free-for-all. America is safer, with entrenched institutions, a more educated populace, and a stronger, more ethical security apparatus.

But these can be undermined if they are not guarded with the diligent sacrifice and critical thinking that their importance demands of every American capable of these qualities.

Republicans recently made a correct decision – sadly, the first in some time – when they introduced and passed legislation protecting airline passengers from lawsuits should their report suspected terrorists.

This shows an understanding that there is a need to take strong, logical, politically incorrect action to define the way America operates. It is unacceptable to let terrorists and their sympathizers dictate events and our way of life to us and the truth was clear enough that over 100 Democrats were forced to agree.

That is exactly the kind of leadership and direction America needs to face the remainder of this century.

The question is, who do you think will provide that starting in 2008? And what, if we end up with another 8 years of a Clinton Presidency, are you prepared to do to ensure that we have that leadership, whether the Democrats or the Muslims like it or not?