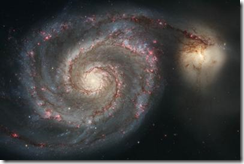 Lawrence Krauss says that God and Science don’t mix, something that our own Claudia has contended, vociferously at times.  Pursuit of logic is a passion with many scientifically-minded people and the pursuit of logic – and logical explanations – can become the object of single-minded devotion.  In some cases this process leads to great truths and technological advancements; in others, the forest is lost among the trees and the researcher with it.  Whither Krauss?  I’ll not presume to guess but his word choices create distortion more than they reveal truth.

It is certainly true God and individual scientific experiments do not mix.  The scientific method by definition calls for the isolation of as many variables as possible so that the one(s) under test can be definitively tested and explained.  In an individual test, therefore, there can be no allowance for the divine.  If there is, the experiment is fatally flawed.

As a software developer I understand the process of examining a seemingly chaotic circumstance, looking for order and root causes, and defining an explanation for behaviors, both expected and not.  It is a very logical endeavor when all of the facts are known but one also relies heavily on intuition when they are not.  The software test, like the scientific experiment, is imagined by intuition and defined by its absence.  Yet pristine logic at the application layer does not mean that the programmer can ignore the fundamental truths of the operating system and development platform.  They still exist, whether our analysis considers them or not.  True knowledge of the system considers all factors, liked and despised alike.  Truth requires it.

Likewise, science is, when all the ideology, agendas, and personal pride is stripped away, the pursuit to understand the principles that govern the universe God created.  That truth does not diminish scientists or dull the luster of their accomplishments.  Rather it increases them for to learn about the world around us is to know a fraction of the mind of God.

Stephen Hawking: We Must Colonize Space

The Greatest Killer of All