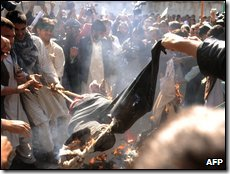 A rumor that American troops burned a copy of the Koran brought hundreds of flag and photo burning Muslims into the streets of Afghanistan today.

Question: Don’t these people have any actual responsibilities to keep them occupied?

The answer seems self-evident, for if they had bills to pay or mortgages to meet or superiors to please then they wouldn’t be out in the streets nattering over nothing as if their lives depended on it.

The unrest in Afghanistan is standard operating procedure on the part of religious radicals who like to whip up a anti-western mob any time they aren’t having their way controlling their country’s society, as most recently documented by yours truly in this PoliGazette piece (which in turn seemed to make me persona non grata at that site).

Seven people were murdered in that pointless, deliberately initiated rampage in Pakistan and one can easily imagine the bearded, turbaned mullahs who spread the deadly lie shrugging their deaths off as unimportant.  They were, after all, only infidels like you and me.

Happily, no one was killed in Afghanistan over today’s rather flimsy untruth.  Sorrow abounds there, however, as on another, less joyful note, 14 Americans were killed in 2 separate helicopter incidents in that country.  Their deaths lie directly at the feet of the same religious radicals who fomented today’s anarchy because their refusal to submit to the authority of the elected Karzai government and support of the Taliban terrorists is what has prolonged the U.S. action in Afghanistan.