Let me begin by saying that the Houston Chronicle is a good newspaper. It does suffer from the problem of excessive political correctness, however, when it comes to crime reporting. The editors policy decision to not report the race/ethnicity of criminal offenders has for many years been a poor one that does not meet the public trust.

The city of College Station’s police department does it right. Below is the full text of an email I received today. Note the precision with which the suspect in the cases in question is described.

An updated press release issued by the College Station Police Department contained the following information. These two aggravated robberies are considered to represent a serious or continuing threat to the Texas A&M community and follow the objectives of the “Clery Act.”

On November 2, 2009 at approximately 8:00 PM, officers were called to 1331 Harvey Mitchell Parkway, Walden Pond Apartments, for a report of an aggravated robbery.  The victim was not injured during the offense. Investigation revealed the victim parked a vehicle and walked towards an apartment. The victim was approached by a male suspect who pointed a silver pistol and demanded money. The suspect then fled the area westbound on foot.

On October 25, 2009, at approximately 7:17 PM, officers with the College Station Police Department responded to The Zone Apartments at 2001 Holleman Drive West, in College Station, in reference to a report of a robbery, in which a weapon was used. Officers investigating the robbery met with the victim, who is a local pizza delivery driver. The victim advised he had just delivered pizza in the complex and was walking to his vehicle in the parking lot.  The victim was approached by a suspect pointing a hand gun at him. The suspect demanded that the victim give him money or he would be shot or beaten. The victim gave the suspect his property and the suspect fled the scene running towards the area of Holleman Drive West and FM 2818. The victim was not injured during the incident.

UPDATE – The investigation regarding the above offenses revealed that the suspect in the two cases is, most likely, the same person.    The description of the suspect by the victims was similar.  In both cases, the suspect approached the victim in a parking lot, displayed a hand gun and demanded money.  The suspect is described as: 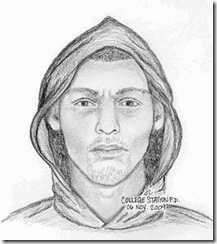 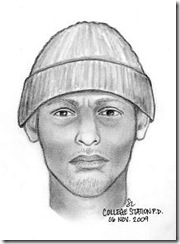 These cases continue to be investigated by the College Station Police Department’s Criminal Investigation Division.

Anyone who has information regarding this suspect or investigation, please contact:

Political correctness be damned. The Chronicle should do its best to match the superior efforts of the C.S.P.D.

Of Guns and Psychos