Kaci Hickox, a nurse who treated Ebola patients in Sierra Leone but has tested negative for the virus, went for a bike ride on Thursday, defying Maine’s order that she be quarantined in her home and setting up a legal collision with Governor Paul LePage. 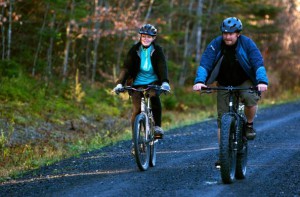 Hickox has flaunted her defiance of the governor by deliberately appearing in public over the last two days. Does this make her a common criminal?

The answer to the question is No, at least for the moment. Certainly Maine’s authorities would like nothing better than to take her into custody, if they were allowed to do so; however, no legal basis exists for her arrest.

This begs the question, however, of mere right or wrong. A certified health professional should know better than to endanger the public as Hickox has. The Hippocratic Oath applies to all health care workers and Hickox has plainly violated her duty to the citizens Maine by placing dozens, if not hundreds of people at risk. As such, the state would be well within its rights to begin the process of stripping her of her professional certifications.

Moreover, two nurses have already been diagnosed with Ebola after having previously been cleared. Despite her foolhardy bravado, Hickox could prove to be the Typhoid Mary of 2014 America, with even more deadly results. Should this happen, Hickox should be charged with 1 count of murder for each death she causes and be liable for the injuries and associated medical costs for all afflicted with the deadly disease because of her deliberate malfeasance.

Do the Math, People (If You Can)