I received an email from a friend today that made the following claim:

Planet Mars will be the brightest in the night sky starting in August. It will look as large as the full moon to the naked eye. This will culminate on Aug. 27 when Mars comes within 34.65M miles of earth. Be sure to watch the sky on Aug. 27 12:30 am. It will look like the earth has 2 moons. The next time Mars may come this close is in 2287.

Perhaps proving at once the power and fallibility of the Internet, this is not the case.

However, it so happened that we watched Apollo 13 last night, the Ron Howard adaptation of the true story of one of NASA’s greatest missions, and this, coupled with the Mars prank and yesterday’s successful space walk and repair of a gyro on the international space station, made me again contemplate America’s failure to explore space exploration.

It must be unfathomable to the Mercury, Gemini, and Apollo astronauts that we have not set foot on the moon in almost 35 years. Nor have we made significant any effort to reach Mars or the asteroid belt in that time, President Bush’s interest notwithstanding.

Our failure to keep the initiative in this area is certainly a great mystery is to me. In fact, I rate it as a national failure, almost an embarrassment, that we’ve done so little.

The space program led directly to numerous advances in technology that we take for granted today and indirectly to who can say how many more?

The program brought America’s greatest minds together with a purpose, one they accomplished with aplomb and to increasing public apathy.

There are many Americans who ask, “What will I get out of sending men to the moon or to Mars?” That is a fool’s question. What does Joe Sixpack get out of watching Paris Hilton’s bony butt gutter-talk through a barn yard on cable TV? Or from guzzling down a 12-pack watching 22 gargantuan, steroid-enhanced freaks of nature move a little brown ball down a field?

What we would get, Joe, is an investment in the future that will – not might, will- pay off in ways that you can’t even imagine. More advances in technology would come. But more important would be the fact of undertaking a difficult, even dangerous challenge and, in the face of a doubting world, accomplishing it.

Challenges like space exploration are important because they prove the national character and give every American something to be proud of, regardless of whether they “get something” out of it or not.

In fact, an investment in space technology would constitute perhaps the most valid use of federal authority there is, being an actual investment in the future of the country, an investment we can expect to see a return from, as opposed to the welfare programs we constantly fund at a net loss.

It would be a welcome change to see the government acting more like a responsible steward of American’s tax dollars than a social worker with no concept of where his program’s funding comes from and no interest in anything but his right to spend it furthering his agenda. Acting, in short, more like a business, in which only investments that provide benefits to those who fund them are undertaken.

Those that inspire us, create greatness, and improve our lives are must-do’s. The space program is one such.

There those who say that we can’t afford to get sidetracked while we’re busy fighting:

I say that investing money and directing men toward scientific research and exploration is an answer to all of these problems.

Islam? Yes. Why do you think they hate America? Because we put our infidel boots on the sands of their deserts?

Hardly. They hate us because our way of life threatens to make theirs obsolete. After all, any society that can do something like this 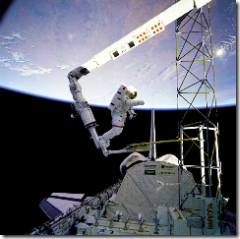 will inevitably drive those that deliberately keep all of their people ignorant and enslave their women into extinction – unless the greater nation is beaten back with raw animal force.

In the field of space exploration and many others, now is the time to press ahead as hard or harder than ever, simply because we can, because doing so increases us, and because it shows the world what is possible in the absence of medieval oppression.