It seems the Washington Post and a large number of other mainstream U.S. newspapers will refuse to run the next two Sunday’s worth of Berkely Breathed’s Opus cartoon strip. Why? Judge for yourself: 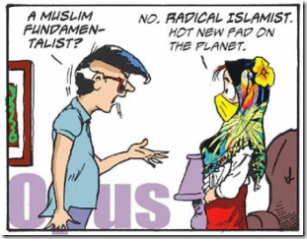 Pretty mild. And mildly funny. Certainly not worth censoring, voluntarily or otherwise.

There are times when it can be embarrassing to be an American, like when George Bush 41 lost his lunch on the Japanese Prime Minister’s shoe or when bearing witness to pretty much anything done by Britney Spears. But these sorts of cultural setbacks could happen in any country. Bush probably had some bad sushi, that’s all, and Britney, well, lots of people actually like to shop at Wal-Mart, too.

But I always thought that the American press, for all of its liberal foppery, would at least guard its own domain, that of free speech.

It’s suicidal, really, this decision, because it says that the press is frightened of offending and willing to placate a noisy sub-culture that is openly using the country’s legal, social, and now journalistic institutions against it. Against mainstream America.

It’s one thing for a fundamentally biased media to sell out America’s traditional values as they’ve repeatedly done. One could write that off to a legitimate belief in their values, however misguided. But it is quite another for the WaPo, et al, to cede their own domain without so much as a protest.

Happily, the ‘Net is here to take up the slackers’ slack. I’m glad Al Gore invented it!

One thought on “Censoring Satire”