Whenever I read about something as cool as the Zephyr I just have to wonder why people waste so much time fighting.

A lightweight solar-powered plane has smashed the official world record for the longest-duration unmanned flight.

The researchers believe it is the first time a solar-powered craft has flown under its own power through two nights.

Pics courtesy of the BBC: 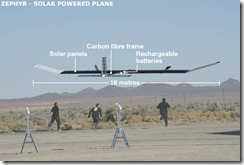 So remind me again what exactly is so fascinating about a religion whose primary tenet is that nothing worth doing is allowed?

The Zephyr and everything it represents is worth fighting for. But servitude 7th century style isn’t.

Thoughts About Aaron Swartz, “Hacking”, and the Law