The illegal immigration problem is out of control in the U.S.  That’s not news.  What may not be so obvious is that the legal immigration process is nearly as bad off.  Delays – often they go on for years – are common for immigrants this country should be falling all over itself to bring in.

I have a personal friend, a software engineer of extraordinary skill, who has been on the waiting list for more than 4 years, this despite the fact that his wife has already received her "green card", their child was born in the States a few years back, they have both worked at the same employer for longer than I’ve known them, and they have the endorsement of more American citizens than one would normally think possible.  He is that good of an employee and person.  Yet the system has failed in his case.

Today CNN reported the story of a sailor in the Navy whose wife faces deportation.  That’s bad enough when Eduardo Gonzalez is at home.  But should he have to deal with that level of stress while he’s deployed overseas?  Can nothing be done? 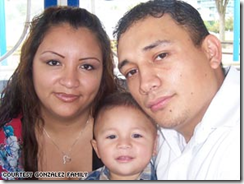 His wife faces deportation to Guatemala — her home country that she hasn’t seen since 1989. He also doesn’t know what would happen to his young son, Eduardo Jr., if that happens.

Gonzalez, who works on helicopters that bring cargo, supplies and military personnel in and out of Iraq, testified before a House Judiciary Committee panel last month, detailing his situation and urging officials to consider some sort of policy to deal with cases like his, where military members’ families could be deported while they’re defending their country overseas.

"I want to serve my country 100 percent. But with this issue in the back of my mind, I feel I can’t do that," he testified on September 6.

So why is Mildred in the sights of the immigration authorities?  Is she a terrorism suspect?  No.  Is she here illegally?  No.  Then what?

In Gonzalez’s case, his wife, Mildred, came to the United States with her mother in 1989 when she was 5 years old. They were granted political asylum because of their status as war refugees from Guatemala.

In September 2000, Mildred’s mother applied for legalization and included her daughter in that application. Her mother was granted legal status in July 2004, according to Gonzalez.

However, six weeks earlier, Gonzalez and Mildred got married, canceling Mildred’s ability to apply for legal status through her mother because she was no longer an unmarried daughter under the age of 21. As a result, her legal status still remains in jeopardy.

A judge in June granted her a one-year extension to remain in the United States. If her legal status does not change by June 8, 2008, she will have 60 days to voluntarily leave the country or face deportation.

In other words she may be sent back to a foreign country because of what is quite possibly the most trivial immigration rules violation imaginable.

Not so says Mark Krikorian, the executive director of the Center for Immigration Studies:

Lawbreakers?  The Gonzales’ crime was getting married a few weeks early, probably out of ignorance of the "rules" or because of bad advice.

Krikorian is wrong in regard to this case.  So is our immigration system.

I’ve written many times about the need to eliminate illegal immigration and secure America’s borders and I’ve done so because I believe that is absolutely the right thing to do, regardless of the popularity of such a change or its impact on the electoral cycle.  We should always do what’s right.

In the Gonzales’ case, what is right is for the powers that be to smack the immigration department down, tell them to do their real job, legalize Mildred Gonzales, and let her husband do his duty in peace.

More generally I would say that American troops should receive preferential treatment in regard to immigration rules as they apply to their spouse and children.  That seems like the least we can do for the men and women who defend our country, Krikorian’s overly legalistic opinion aside.

One thought on “Legal Immigration Dysfunction”