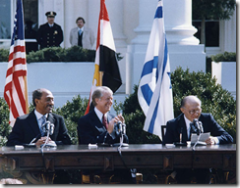 Jimmy Carter says that the United States tortures prisoners in violation of international law.  From CNN:

“I don’t think it. I know it,” Carter told CNN’s Wolf Blitzer.

“Our country for the first time in my life time has abandoned the basic principle of human rights,” Carter said. “We’ve said that the Geneva Conventions do not apply to those people in Abu Ghraib prison and Guantanamo, and we’ve said we can torture prisoners and deprive them of an accusation of a crime to which they are accused.”

He knows it?  Knows.  I believe it but I don’t know it.  But he’s a former president, perhaps Carter’s sources are better than the mass media.

As I recently said on this blog I think that a government has to reserve the right to do whatever it takes to protect its people against attacks that would kill many of its citizens.  As a commenter recently pointed out, the government does not need every American’s permission to act nor, in fact, even majority support.

However, that is not the same thing as torturing every suspected terrorist or enemy combatant captured on the battlefield.  Carter offered no meaningful insight into how many cases he’s talking about.  Hopefully it’s few, if any.

As for the principle of human rights, an enemy that respects them deserves to be respected in turn.  Those that fight like animals without regard for basic human rights may need to be confronted in kind.

Given an audience, Carter wasn’t done yet.

Carter also criticized some of the 2008 Republican presidential candidates, calling former New York Mayor Rudy Giuliani “foolish” for his contention the United States should be open to use force on Iran.

“I hope that he doesn’t become president and try to impose his conviction that we need to go to war with Iran,” Carter said.

And speaking of the GOP candidates in general:

“They’re competing with each other to appeal to the ultra-right-wing, war-mongering element in our country, which I think is the minority of our total population.”

Ultra-right wing?  No, I don’t think so.  The majority of Americans would like for the troops to come home from Iraq today.  The majority also recognizes that this would be utterly irresponsible and result in the deaths of thousands more Iraqis in addition to the ones the war, misguided in my opinion, has already caused.

War-mongering?  That’s called being smart enough not to make a bad situation worse.

Democratic Sens. Hillary Clinton of New York and Barack Obama of Illinois also drew Carter’s criticism for refusing recently to pledge to withdraw all troops from Iraq by the end of their first terms if they win the presidency in 2008.

“I disagree with their basic premise that we’ll still be there; I think the American people want out,” Carter said. “If there is an unforeseen development where Iraqi people request American presence over a period of time I think that would possibly be acceptable, but that’s not my personal preference.”

See above.  Wanting out and getting out are two completely different things.  I applaud Clinton and Obama for sticking with mainstream Americans on this issue and rejecting the ultra-liberal Carter and the progressive fringe of their own party.

Ted Cruz had the Worst Week in Washington

Iraq Too Hard, Some Say