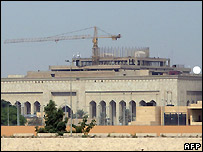 There is a lot of good news coming from Iraq these days:

Violent deaths of U.S. troops and Iraqi civilians appear to have fallen sharply in Iraq in October, according to the latest Associated Press tally.

The AP’s figures mirror other reports that the levels of bloodshed are falling here. But the meaning of these statistics is disputed, and experts generally agree that the struggle for security and stability is far from over.

The number of Iraqi civilians killed fell from at least 1,023 in September to at least 875 in October, according to the AP count.

That’s the lowest monthly toll for civilian casualties in the past year, and is down sharply from the 1,216 recorded in October 2006. The numbers are based on daily reports from police, hospital officials, morgue workers and verifiable witness accounts.

The count is considered a minimum based on AP reporting; the actual number is likely higher, as many killings go unreported.

The drop in deaths among U.S. military personnel in Iraq was even more striking, according to AP’s records – down from 65 in September to at least 36 in October. The October figure is by far the lowest in the last year, and is sharply lower than the 106 deaths recorded in October 2006.

The relative period of calm – if that’s what it is – came during the Muslim fast of Ramadan, a time when militants have in the past escalated their attacks on U.S. forces.

One bit of information that is not as good is the rebellion going on inside the U.S. State Department over possible mandatory postings to Iraq:

Hundreds of US diplomats have protested against a government move to force them to accept postings in war-torn Iraq.

About 300 angry diplomats attended a meeting at the state department, at which one labelled the decision a "potential death sentence".

If too few volunteer, some will be forced to go to Iraq – or risk dismissal, except those exempted for medical or personal hardship reasons.

Iraq postings have previously been filled on a voluntary basis.

If diplomats are forced to go to Baghdad it won’t be the first time.  Africa and Vietnam were mandatory assignments in past decades.

Still, it is a small but important data-point in measuring how much progress we’re making in Iraq.

Someone – I forget who – said that we would know that we had succeeded in Iraq when a single pair of Iraqi police officers could walk the streets of Baghdad as safely as our own police do in the U.S; i.e., in relative safety.

A similar measure might be that we’ll know we’re getting close when State Department officials start volunteering for postings there.