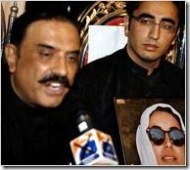 The NY Times writes that Bilawal Bhutto Zardari has been selected to be the future leader of the Pakistan Peoples Party, replacing his slain mother.

The moves by Ms. Bhutto’s opposition party, the Pakistan Peoples Party, were clearly aimed at marshaling an outpouring of grief and anger to electoral advantage in the Jan. 8 parliamentary election.

His father, Asif Ali Zardari, said he would manage the chairmanship on his son’s behalf until he finished his university degree, for a minimum of three years.

At the news conference, the elder Mr. Zardari said he would not run in the election and therefore would not be the party’s prime ministerial candidate.

That job, he said, would probably go to the party vice president, the veteran party leader Makhdoom Amin Fahim, but that was a decision, he added, that would have to be made by party leaders.

To say the Wikipedia link above is sketchy would be overstating its completeness.  So what do we know about Fahim?

Not much.  Allegedly the job of prime minister was his for the taking in 2002.  All Fahim had to do was disavow Benazir Bhutto to step into the position and he refused.  Loyalty clearly counts for something,  But what, exactly?

The selection of a college student as their nominal leader shows that the PPP is in trouble.  Will Fahim be a capable leader and steward of the Bhutto legacy?  Will he embrace the anti-terrorist positions that, in large part, cost Benazir Bhutto her life?  And will he cede leadership of the party to her son when the time comes?  All questions without answers.

Personally I find the idea of a 3rd generation Bhutto dynasty somewhat uninspiring.  Is there no more capable leader for the party of democratic reform in all of Pakistan than a 19-year-old boy?  Yes, he has the right name.  But at present that, plus some vaguely defined tutelage at the hands of his murdered mother, is all he has.  I understand that emotions are running high right now and that Ms. Bhutto, were she still among us, would want the PPP to use everything it has to win the upcoming elections should they be held as scheduled.  Yet in the long run relying on the namesake of a royal line is a poor substitute for selecting leaders based on merit.

These reservations aside, I’m glad to see that the PPP is not giving up without a fight.  The Pakistani people, like people everywhere, deserve to choose their own leaders as they see fit, to replace them using the ballot box if they disappoint, and to hold political criminals accountable to the rule to law.

It had been clear for some time that the PPP was the only major party capable of delivering these principles to the people.  Whether that’s still possible remains to be seen.