Unhappy with the deal reached between the parties about the legal fate of telecom companies who helped the feds in the aftermath of 9/11, two of the looniest of the left are banding together in an attempt to filibuster the bill in the Senate: 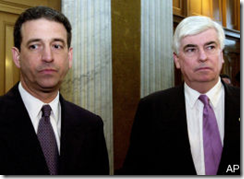 "If the Senate does proceed to this legislation, our immediate response will be to offer an amendment that strips the retroactive immunity provision out of the bill. We hope our colleagues will join us in supporting Americans’ civil liberties by opposing retroactive immunity and rejecting this so-called ‘compromise’ legislation."

Meanwhile, Pamela Helsey points out that telecom companies give more money to Democrats who support immunity than those who don’t.

The question of whether politicians vote according to whose filling their coffers is a fascinating one and well worth asking.  In this case, however, it’s a bore.  The Democrats being targeted for that special progressive-style love more commonly known as liberal hate are now voting in a fashion I deem correct.  What made them change their tunes is not that interesting to me.

Rather than ramble on, let me leave you with 3 thoughts about what is so irritating about this immunity boondoggle: