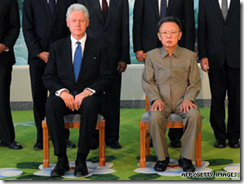 John Bolton says that Bill Clinton’s diplomatic rescue of two American journalists being held hostage in North Korea was unwise, not only because it puts more Americans at risk in the future but because it continues the Clinton tradition of giving in when rogue states begin to behave badly.

While the United States is properly concerned whenever its citizens are abused or held hostage, efforts to protect them should not create potentially greater risks for other Americans in the future. Yet that is exactly the consequence of visits by former presidents or other dignitaries as a form of political ransom to obtain their release.

This history is of the United States rewarding dangerous and unacceptable behavior, a lesson well learned by other would-be nuclear proliferators.

One contrasting view comes from Dr. Clarissa Pinkola Estes, who says that the successful release of the hostages is as much do to a proper show of respect as to any promises of future rewards:

Acting ritually and sincerely to meet certain Asian’s senses of propriety, is not only a display of courtesy; it is a display of power, power to bridge, power to negotiate — saying… By following certain ritual, by showing proper courtesies, by saying words that may sound weak to other cultures than this Asian one… even if you are my opponent, I clearly demonstrate to you that I have well disciplined restraint in my interactions with you.

In other words, if you play my game, my way, you might have a better chance to wheedle something out of me because I might feel stroked, powerful, and benevolent.