Vladimir Putin is a bad boy and, like all bad boys, has a propensity for telling lies whenever he thinks he can get away with it. 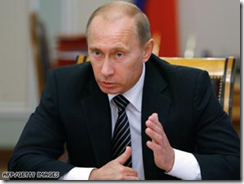 Today Vlad says that, in spite of the fact that it’s Russian troops in Georgia, the U.S. is behind the fighting in that country and that “American citizens” – dare we say spies? – were there too.

In an exclusive interview with CNN’s Matthew Chance in the Black Sea city of Sochi on Thursday, Putin said the U.S. had encouraged Georgia to attack the autonomous region of South Ossetia.

“U.S. citizens were indeed in the area in conflict,” Putin said. “They were acting in implementing those orders doing as they were ordered, and the only one who can give such orders is their leader.”

What a shock this must be to President Bush.  Not only is Vlad a bully with no soul, he’s also looked into W’s eyes and divined his plan to start a civil war within the borders of one of our better allies in the region.

This is most likely a classic case of the aggressor blaming the victims in order to justify his actions.  After all, you don’t think that Russia had anything to do with the troubles in the Georgian provinces, do you?  Surely they weren’t sending men into Georgia to incite rebellion.  Must have happened all by itself.  Right.

Personally I think that if the people of a region large enough to sustain itself as a national entity want to break away from the mother country that they ought to be allowed to go their own way.  Witness the Kurds in Iraq and Turkey, as well as the Basques in Spain.  Why should an unwanted government be forced down people’s throats simply to preserve artificial national borders?

Power and economics are the reasons, of course.  But the latter is more of a perceived issue than a real one.  Corporate entities break up and re-align on a regular basis in order to arrive at a more efficient set of operations.  Why can’t governments simply allow people to determine their own destinies?

I’m sure that’s a laughable view to a man like Vlad Putin, a dictator with a penchant for having his way and a big dream of re-uniting the Soviet Union.  He’d like nothing better than for bits of that failed nation to break away and make themselves easy pickings, just as in Georgia.

All Vlad needs is someone to blame for his actions.  Doesn’t have to be true, obviously.

World Opinion in the Age of Hope