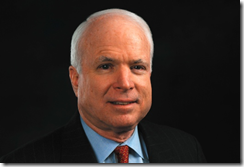 There’s been a lot of unwarranted, cheap talk about John McCain being a coward, that he’s poisoning the aftermath of an inevitable Barack Obama victory, even some commentary that he’s inciting mobs to violence against his Democratic challenger, and even that a McCain loss – a near lock at this point – could end in a civil war.

McCain effectively shut these challengers down today when he told a group of his supporters, “I respect Sen. Obama and his accomplishments.  I want EVERYONE to be respectful, and let’s make sure we are.”

Hear, hear!  Whether McCain, my least-unfavorite candidate, wins or loses I don’t want to see anything happen to Barack Obama.

It’s past time for people in this country to grow up and accept that a man with different color skin than the majority of us can be a leader of the nation.  Moreover, such a man should not have to hide behind a phalanx of secret service agents worried about who’s waiting in wait for him around the next corner.

So, if you happen to be a prejudiced, negro-hating, redneck hick from Muskogee or some such hell-hole and you’re thinking about taking a shot at Obama to “win one more for the Old South”, just don’t do it.  An alternative:  How ’bout walking down the dirt road to the old Winn-Dixie, grabbing a big jug of Boone’s Farm, drinking yourself into a stupor, and blowing 12-gauge holes in the junk car in your back yard instead?  Not much of a pastime but at least the destruction and stupidity would be kept on a personal level where it belongs.

(Of course, this is not exclusively a right-wing issue.  Those on the left who are assuming the cool-headed, holier-than-thou pose now that their incendiary rage has rocketed them to the threshold of victory should remember the things they said and wrote over the last year and recall what has been said and shouted about President Bush, VP Cheney, and Secretary Rumsfeld in the streets, in Democratic caucuses, and in Congress.  They can’t fall victim to amnesia just because their guy is going to win.)

Contrary to what Dave Winer seems to think, there’s not going to be a civil war in this country if and when Obama wins the election.

This is not going to end well if we can’t agree that whoever wins this election is our leader for the next four years, at a time when we desperately need leadership. There’s an awful spirit to this competition that says when it’s over we will not unite, and that would be a disaster.

That’s not going to happen. I’m not sure what Dave’s trying to achieve with that morbid line of inquiry seeing as how it works against his candidate unless he’s aiming at the get-their-back-up crowd to stiffen their pro-Obama resolve.

Fact is that this has never been a particularly united set of states.  Read your history closely and you find that virtually every decade of our existence as a nation has been filled with bitter party and personal rivalries, foul name-calling, and vile acts of political skulduggery.  This year is no different.

We’re tempted to think that no other time in American history has been as difficult and dangerous than that which we’re embroiled now.  But there have been darker days in our past and certainly we face darker ones in the future if we don’t get our collective act together.

Whether you support Barack Obama or not – and I don’t, believe me – if he wins the presidency you and I need to do whatever our consciences allow us to do in order to present a united front to the rest of the world.  There are a lot of bad people out there who frankly don’t care if you’re a Republican or Democrat – they want our society to stop existing, left and right alike.  Let’s not let that happen.

It’s clear that an Obama presidency coupled with the hideous Democratic Congress mean higher taxes, more tax-dollar giveaways, continued leadership support for abortion, socialized medicine, and fewer business opportunities for all of us.  But it could be worse.  A lot worse.

What we all need to do is get involved and stay on top of our would-be leaders to ensure that they’re doing the work that needs to be done.  Energy has got to be priority one and everything must be kept on the table.  Drilling offshore, ANWAR, nuclear, coal – all of it needs immediate investment.  Force Congress to stop bickering over insipid tangents like FISA’s telecom immunity clause, for instance, and deal with real priorities.

The current financial train wreck has, I hope, shown Americans the folly of spending more than we make.  This is just as true for Congress as it is for Joe Sixpack and even though some of us have a taste and longing for the “free stuff” that Democrats like to take from the wealthy and give away, we need to force our government to operate at a surplus.

In fact, it’s John McCain who has been the one to say that Social Security and Medicare cannot continue to pay out benefits at the current level.  And it’s John McCain who, despite the liberals’ sudden shyness about attack politics, has stepped out in front of his own people and told them how they need to behave.

That’s the example that Americans need to follow, whether McCain is president of the U.S.A. or not.

The Importance of State-level Authority

The West’s Moral Imperative on Iran