Perhaps the fundamental problem of our time is that no one wants to tell – or hear – the truth anymore.  This has certainly been true in Detroit, et al, where the United Auto Workers has fought off wage and benefit cuts for decades.  Now GM is poised at the brink of bankruptcy as a result.

Loaning GM money would be viable if labor costs were reduced as part of the agreement.  But like others on the left, whose support for unions blinds them to reality, Eric Hoehlert still denies that there’s a fundamental problem with the cost of GM’s work force.

In fact Hoehlert says that the NY Times, Newsweek and other media outlets that reported GM’s labor costs were nearly 50% higher than Toyota’s were not only wrong but either incompetent or malicious:

…what’s obvious to me is that it’s harmful to public discourse when the press, on such a central issue facing our country, fails to clearly state the facts and instead perpetuates misinformation with sloppy reporting…

Mark Perry doesn’t see it that way.  In fact, he says that GM and the UAW misled Congress last week when they said that a new labor agreement will make GM competitive on wages.  Perry’s chart says it all: 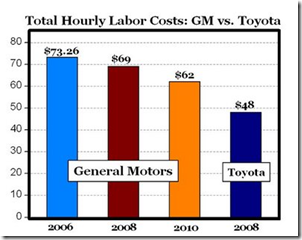 Hoehlert’s assertion that the media is biased against blue-collar workers and against auto unions doesn’t make sense to me.  Nor does his superficial claim that UAW workers don’t make the hourly rate that the Times, et al, reported.

What that $70 figure (or $73) actually represents is what it costs GM in total labor expenses, on an hourly basis, to manufacture autos.

Do you see that there’s a big distinction? General Motors doles out $70 an hour in overall labor costs to manufacture cars. But individual employees don’t get paid $70 an hour to make cars. (The discrepancy between costs and wages is explained by additional benefits, pension fees, and health-care costs GM pays out to current and retired employees.)

The unpleasant truth that Hoehlert buries in parentheses at the end of his thesis is no mere footnote, it’s the entire point and problem with Detroit, one that can be summed up in a single phrase – total compensation.

For GM, the problem isn’t so much the current wage of an assembly line worker, it’s the current and historical obligations the company has in addition to base salaries.

Like an anchor dragging bottom, the obligations demanded by auto unions are a dead weight that has killed GM’s momentum and threaten to drag the entire company down.  The thinking that led workers and union leaders to make unrealistic demands – demands backed by threats of strikes and violence against non-unionized workers – are the primary cause for automakers’ financial crisis.

It’s easy and popular to blame GM’s management for what has happened to the company.  But does anyone truly believe that GM would be teetering on the edge right now if their employees’ total compensation was in line with Toyota’s?

The truth that Hoehlert and others can’t bear to admit is that the leftist policies of unionization and wage and job entitlement have inevitably brought Detroit to this moment in history.

Faced with nimbler, more efficient competitors, sluggish, sloppy union shops simply cannot compete.  It has always been so and always will be.  Should Congress now bail out companies brought to destruction by these policies?

Actually, yes.  We need a domestic source of cars and trucks.  But taxpayer money should only be loaned to Detroit with the attached string of rectifying the fundamental problem of unionization.