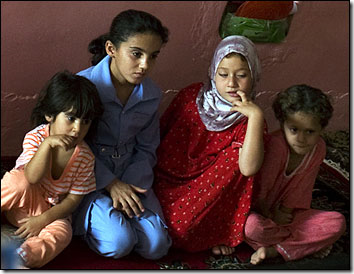 The Washington Post reports that more than 60% of Kurdish women in the northern part of Iraq have had their clitoris “circumcised” as part of what some Kurdish women consider a cleansing procedure demanded by Islam.

Is there a more vile crime a woman could inflict on another woman?  Usually it takes a man inflict such horror on a young girl.  Whenever I read about the mutilation of young girls like these I am reminded of Black Wine by Candas Jane Dorsey, a fantasy novel in which a woman recounts how her mother-in-law had her clitoris removed because she enjoyed sex too much.  “She cut out the heart of my love,” she says, giving very apt description of the practice.

The mother of a just-cut Kurdish girl might be speaking for Islamic women everywhere when she gives her reasons for tricking her daughter:

“This is the practice of the Kurdish people for as long as anyone can remember,” said the mother, Aisha Hameed, 30, a housewife in this ethnically mixed town about 100 miles north of Baghdad. “We don’t know why we do it, but we will never stop because Islam and our elders require it.”

Kurds do have two reasons for the practice, though.  First, it helps women control their sexual desires.  Second, it purifies their spirits and allows others to eat the food they prepare.  This from an elderly village woman:

“I would not eat food from the hands of someone who did not have the procedure,” said Hurmet Kitab, a housewife who said she was 91 years old.

Kitab, who lives in the village of Kalar in Kurdistan’s eastern Germian area, where female circumcision is prevalent, has had the procedure done on herself and all her daughters. When asked if she would have her 10-month-old granddaughter Saya circumcised, Kitab said “Of course” and explained that the procedure is painless.

“They just cut off a little bit,” she said, flicking her finger at the top part of a key, which she then dropped on the floor.

Starve then, crone, and just deserts to you.

Contrary to modern belief systems, some acts are objectively wrong and cannot be rationalized by perspective or cultural history.  Female genital mutilation is such an act.

Consider the rape of a woman by a man.  In the aftermath of such a devastating personal invasion there is, however remote and/or distant in time, the possibility of recovery and the resumption of a normal sex life.  Not so for these innocent young girls in Iraq and elsewhere, maimed as they are by their culture and their elders’ religion.

How to Fight a War

3 Years Ago This Week…