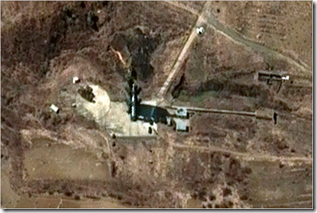 Defying of an alliance of nations that included the United States and China, North Korea has launched its latest rocket, one believed to be capable of reaching Alaska and Hawaii.  Previously, South Korea had called for sanctions to be enforced against the North if the regime there went ahead with the launch, Foreign Minister Yu Myung-hwan saying, “It is common sense to go back into a sanctions mode after North Korea’s rocket launch.  When there is a violation of the UN Security Council resolution, we just cannot go [on] as if nothing happened.”

That Yu’s statement is not true obvious – UN resolutions are routinely ignored, often with good reason considering their content.  While justified in this case, there is no reason to believe that the North Korean government, still led by the megalomaniacal Kim Jong-Il, would be affected by sanctions if they were implemented.

Stephen Bosworth, the U.S.’s special envoy to North Korea says that the U.S. will try to re-engage the North in six-nation talks in order to persuade it to give up its nuclear ambitions.

That possibility seems remote given repeated instances of North Korea negotiating in bad faith.  Moreover, Japan’s Sankei Shimbun has quoted Japanese Defense Ministry sources as saying that a group of Iranian missile experts were in North Korea to help Pyongyang with the recent launch.

Axis of Evil, anyone?

Fat Russian Ballerina Must Be Re-hired

8 Transferred out of Guantanamo