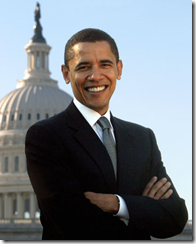 Arizona State University is not planning to award Barack Obama an honorary doctorate degree in exchange for giving the commencement address at the school – and rightly so.

According to the ASU State Press, ASU President Michael Crow told the committee that “significant contributions to education and society over the course of a person’s career merit consideration for an honorary degree.”

Becoming president of the United States is a great personal achievement, no doubt about it.  But in and of itself that achievement means very little for the country.

Perhaps Mr. Obama’s policies, which I consider ill-advised on the whole, will rescue the country from its current economic troubles.  If so, he will have accomplished something worthy of such honor.  Or perhaps fate will provide him with other opportunities to prove himself in the coming years.  At this point Mr. Obama’s resume is paper-thin, too much so for the office he already holds.

If being a U.S. Senator and President of the United States — the so-called leader of the free world — is not enough to be deemed as having made significant contributions to society, Obama also has a long list of contributions to education. The first bill Obama sponsored in Congress was the HOPE Act. He developed comprehensive plans for students to receive education benefits in exchange for public service. Not to mention that he was the first African American president of the Harvard Law Review, taught Constitutional law at an ivy league university, and, among many other accomplishments, served as a community organizer where established an adult education program and a college preparatory program in inner-city Chicago.

Good work, all of it.  But hardly unique or even noteworthy when one considers the background and experience of most of his former compatriots in the U.S. senator, most of whom possess much more experience at home and abroad.

Tenley, one of Dawn’s first commenters, had to pull the race card, naturally:

I’m sure Tenley isn’t sure, the idea of an objective standard being applied without need or race-based skewing obviously being a foreign one.

Barack Obama may have a great career as president.  A few years down the road such an honor may well be a no-brainer for schools like ASU.  But at this point he’s only been in office about 11 weeks.  It’s a little early for the throwing of laurels and wreaths, wouldn’t you say?

Michael M. Crow, president of Arizona State University, tells POLITICO that the school is reconsidering its widely mocked plans not to give President Barack Obama an honorary degree when he speaks at commencement on May 13 and will “honor him in every way possible.”

“There was no intended slight,” Crow said by telephone from his office in Tempe. “We had not yet talked about what honors we might give him as our commencement speaker, and we still have a month to work all that out. We don’t want anyone to think we do not recognize what he has achieved and what he means in America.”

A formal decision has not been made, but it was clear from Crow’s comments that the university is headed in that direction. ASU risked becoming a national punch line if it did not quickly retreat from its policy against conferring honorary degrees on a sitting politician.

“Typically, the university’s policy relative to honorary degrees has been that people who are sitting politicians, we don’t given an honorary degree,” he explained. “It’s kind of a local thing. We’ve gotten a huge reaction from a lot of folks as if some decision was made not to give him one. Far from it.”

Mistake.  There’s no reason for ASU to change its policy.  Moreover, the honor conferred by an honorary degree is lost if that degree is granted as a result of public pressure, even more so when the whining is accusatory and insulting, as it is at HuffPo.

Clinton Doing What She Had To