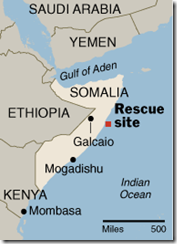 President Obama has been getting a lot of pats on the back since the successful military operation that resulted in the rescue of kidnapped America Captain Richard Phillips.  Some of these are deserved – he is the Commander-in-Chief, after all, and his guys kicked some ass getting Phillips back.  Kudos go to the men involved in the op as well as the man in the big chair in D.C.

Some liberal writers have taken the victory and run with it by declaring the small-scale engagement a final verdict on the new president’s toughness.  It’s hardly that, although they are certainly justified in enjoying the discomfiture of the know-it-alls who bet against Obama by publicly calling him a pantywaist, among other things.

There’s no doubt that President Obama is tougher than he looks.  You might say that doing so wouldn’t take much, what with the classy suits, the urbane, upper-crust look, and his cool smile that he cultivated and turned into votes last year.  But that would be missing the point.  Again.

Hillary Clinton found out just how tough Barack Obama could be during the Democratic party’s primaries.  He learned how to play hardball in the big city and he isn’t afraid to go all-in – if the issue on the table is one that matters to him.  It took the race issue to beat Hillary Clinton and he used it.  Point Obama.

The question isn’t whether he’s willing to be a strong leader but rather if he will do so on a consistent basis and on the right issues.

The Somali piracy issue is a no-lose for Obama, so he can afford to gamble a little by getting rough with them.  In the not-so-recent past, pirate scum like these would have been shot on sight or hung if captured.  Whatever watered-down version of frontier justice the Obama-led military might unleash against them won’t be protested by anyone who matters here at home.

“I want to be very clear that we are resolved to halt the rise of piracy in that region,” Mr. Obama said. “And to achieve that goal, we’re going to have to continue to work with our partners to prevent future attacks. We have to continue to be prepared to confront them when they arise. And we have to ensure that those who commit acts of piracy are held accountable for their crimes.”

Of course, it’s easy to talk tough now, at the beginning of what could prove to be a lengthy process of pulling weeds out of the Indian Ocean.  What sort of resolve will President Obama have 3 years from now when the venture is over-budget and the pirates pull a couple of high-profile jobs on valuable targets?

I don’t want to sell the rescue of Captain Phillips short – it was a great thing our men did.  But it bears keeping in mind that we’re only talking about 4 lightly-armed boys in boats, not a credible, long-term threat to national security.

President Obama has a long way to go before he can claim the kind of steadfast resolve that characterized President Bush’s commitment to the peace in Iraq.  Hopefully he will demonstrate that much leadership and more in the future.  But we can’t assume that he will based on one small operation, no matter how successful.

Trent Lott: How Could You?