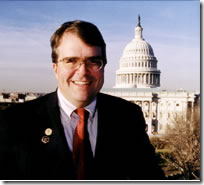 I recently had about ninety seconds alone with Congressman John Culberson, the Republican representative from Texas district 7, which includes the west Houston area, and used the opportunity to ask him about congressional term limits.

“What do you stay to those who believe that term limits are necessary to restore representative government to our republic?”  I asked.

Culberson, who had just wrapped up an impromptu meet-and-greet with a friendly crowd at the Houston tea party, initially responded by saying that he was just now getting into a strong position within the house committees on which he serves.  But before completing that argument he changed tacks, saying that term limits can have negative effects, and pointed out that Houston lost Bob Lanier, a very popular mayor, to term limits in 1998 after just 8 years in office.

“Besides,” Culberson said, “voters have a chance to term-limit me every two years.”

That’s not strictly true, of course, since sitting members of Congress are rarely faced with tough challenges in their party’s primary.  When I pointed out that Republican voters in his district – which is not my own, I should add – effectively have no choice because voting Democratic isn’t a viable alternative for most of them, Culberson stuck to his talking point, repeating the every-two-years line again before adding that advocates of small government and local authority have no better friend in Congress than him.

I thanked him for him and we parted ways, both of us probably a little confused at the encounter, him because of questions that must have seemed out of context at the conservative protest and me because if a small-government, self-described Jeffersonian doesn’t value turnover in government I had to wonder who would.

As I noted previously, sentiment for term limits was luke-warm at best.  Discussing the interview off-line with a reader, the response I got was that when/if a high quality representative was found that the district needed to hang onto him/her because there aren’t that many good choices out there.

Personally I don’t buy that argument now any more than I ever have.  Being a good representative is about intelligence, character, and knowing right from wrong.  Skill at making back room deals, horse trades, and the quid pro quo of modern politics is nothing to be desired.  Rather, these are symptoms of a system of governmental careerists, the very thing deemed undesirable by the Founding Fathers.

For instance, you cannot tell me with a straight face that there is no suitable replacement for John Murtha anywhere in his district.  That simply is not true.  Yet he’s served 35 years in Congress, most of them after being caught up in the Abscam scandal.

To most unbiased observers – and even some who are – it’s clear that the political culture in Washington D.C. needs changing.  How that is ever supposed to happen when the same players continue to jockey for position after every election is a mystery.  My consternation continues unabated.  What’s needed is obvious.  Who will make it happen is another question entirely.

One Man’s Humor is Another’s Apology Waiting to Happen