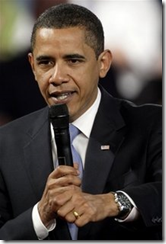 In a sharply worded article the AP has finally taken notice of the Obama budget deficit and called it what it is – an economic nightmare.  Moreover, Mr. Obama is identified as being part of the problem rather than the solution.  Good to see a dose of reality in the morning news, even if the news is bad.

“That wasn’t me,” President Barack Obama said on his 100th day in office, disclaiming responsibility for the huge budget deficit waiting for him on Day One. It actually was him — and the other Democrats controlling Congress the previous two years — who shaped a budget so out of balance.

And as a presidential candidate and president-elect, he backed the twilight Bush-era stimulus plan that made the deficit deeper, all before he took over and promoted spending plans that have made it much deeper still.

The article goes on to explode various of the Obama administration’s claims about the economy, its plans for the country and how it plans to pay for them, saying, among other things, that: “his proposed budget ‘will cut the deficit in half by the end of my first term’ is an eyeball-roller among many economists”.

Cutting to the chase:  The Obama administration and the Democratic Congress don’t plan to pay for any of their ill-advised spending – that’s a future generation’s problem.

Good article from an unexpected source – read it.