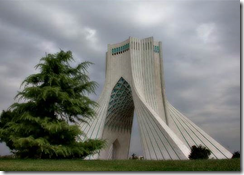 Roger Cohen’s report from Tehran is a must-read.  I hate to chop it up here, but there are some points I want to make.

Iran’s women stand in the vanguard. For days now, I’ve seen them urging less courageous men on. I’ve seen them get beaten and return to the fray. “Why are you sitting there?” one shouted at a couple of men perched on the sidewalk on Saturday. “Get up! Get up!”

That’s so awesome.  A man saying the same words would not inspire another man the same way.  Iranian women have so much to gain from a free society; it’s not hard to see why they are so motivated after 30 years of repression.

“Can’t the United Nations help us?” one woman asked me. I said I doubted that very much. “So,” she said, “we are on our own.”

The United Nation is a joke, a bad joke that gives thugs and dictators like Khameini and Chavez equality with the President of the United States or the Prime Minister of England.  The U.N. is a place where grievances are aired; no real crisis can ever be resolved there if it requires any sort of conflict or commitment.

A better question would have been, “Can the United States help us?”  Sadly, the answer would still be “No”.  But if any formal outside assistance could be generated, it would come from the U.S.

I looked up through the smoke and saw a poster of the stern visage of Khomeini above the words, “Islam is the religion of freedom.”

Not so much, obviously.  There is never freedom in state-mandated beliefs and behaviors.  Legality necessarily constrains freedom and religious legalism as much or more so than any other form.  Iran’s state religion has brought the world multiple forms of terrorism and its own people unthinkable levels of oppression.

None of this, it must be said, is in God’s plan for people.  Somewhere in his heart, even the Ayatollah must recognize that elementary truth.

Where’s the Audacity to Hope for Iran?