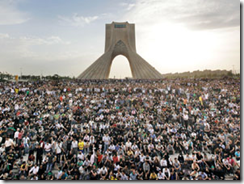 Barack Obama was propelled to the presidency in part by his book, The Audacity of Hope.  But one has to wonder where his fabled audacity was when people just like us needed it the most.

Despite reports of politically motivated arrests, police brutality, and at least one death, hundreds of thousands of people marched in Tehran, Iran today in protest over what they believe to be the fraudulent re-election of Mahmoud Ahmadinejad.

Barack Obama’s support for Iranians who want nothing more than to free themselves from tyranny should be firm and unwavering.

Not so says Ben Smith, who wrote that “Obama also was elected on a promise to tone down America’s moralizing rhetoric”.

Balderdash.  Barack Obama was elected primarily because he was a Democrat in the right place at the right time.  His convincing victory over John McCain would have been a true rout if the country trusted his foreign policy direction.  Thus far our lack of faith has been justified, as demonstrated by the administration’s failure to lend verbal support to the Iranian opposition in their hour of need.

Only when it became apparent that the Iranian’s protests were not going to fade away did Mr. Obama acknowledge the obvious, that the Iranian election was fixed for Ahmadinejad, the mullah’s choice for president of that country.

Certainly true.  But Mr. Obama does not go far enough.  Americans were rightfully troubled when the fraudulent vote was announced because all people, in every nation around the world, have been born with the inalienable right to elect their own government and that right was stolen from an unknown number of Iranians last week, stolen and trampled by Iran’s oppressive theocracy in its lust for power.

Democrats may want to tone down the so-called “moralizing rhetoric” but I would suggest a different approach: Tell the truth at all times and let the diplomatic chips fall where they may.

Some of the sad truths in this case are that:

So be it.  If that is the price of standing on the side of an oppressed people, then westerners of all nations should be willing to pay it rather than appease the sponsors of terrorism that currently lead Iran for another day.

That’s true even if Ahmadinejad would have won the election had the votes been counted fairly, for it’s not the outcome that is important but the Iranian government’s commitment to its responsibility to uphold the fundamental rights of its people.  That’s what Barack Obama must defend in the strongest possible terms, even if the result is unfavorable at the polls, the negotiating table, or both.

Barack Obama was elected in part because of his claims to boldness.  He said that he would be audacious.  The world is waiting.

The Greatest Killer of All