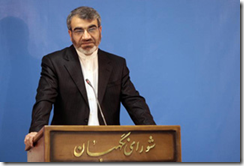 These words speak for themselves:

“Statistics provided by Mohsen Rezaei in which he claims more than 100% of those eligible have cast their ballot in 170 cities are not accurate — the incident has happened in only 50 cities,” [Iran’s Guardian Council’s Spokesman Abbas-Ali] Kadkhodaei said.

Are young Iranians supposed to be comforted by that?

A little amateur statistics, then.  Let’s say that in City X that 110% of the voters voted, somehow, and 63% of these went for Ahmadinejad and 34% for Mousavi, as reported by the regime.  Let’s also say that 110,000 votes were cast, using round numbers to make the rest of the analysis easier.

Ergo we begin with:

Now, the big leap.  I presume that the ballot box stuffing was done in favor of Ahmadinejad.  This isn’t too much of an assumption; nevertheless, it is an assumption and you know what happens when you assume.

Having made the big assumption, let us then make another, namely that actual voter turnout in City X was the anticipated 80%.  That means that 30,000 votes recorded were illegal, leading to these more accurate results:

Ahmadinejad still wins, carrying the city by a narrow margin, the race close enough, perhaps, to raise the specter of fear and defeat in the hearts of Iran’s ruling mullahs.  Enough fear to make them cheat?  Unknown.  But the possibility exists and events that have transpired since have done nothing to diminish the probability that the Khameini regime tried to rig the vote.

One thought on “Iran’s Guardian Council: Vote Fraud Only in 50 Cities”