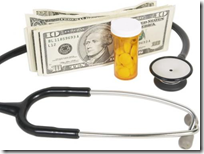 Even the debate over health care is not immune from commentators whose caustic, even violent rhetoric would be more at home at a third-world pit fight than in a democratic society.  Witness one Dr. Kirk James Murphy, whose idea of the Hippocratic Oath is apparently limited to those he personally approves of:

The megacorps executives don’t deserve mere corporate bankruptcy: they’ve killed and maimed so many of us to deserve a fate worse than Gitmo. In a world free of human rights concerns, I’d cheerfully nominate them all – and their in house / outside legal counsel and lobbyists – for mandatory total organ donation. Though these heartless bastards don’t have anything to offer those awaiting cardiac transplant, the rest of the transplant lists could use the relief.

Doctor, please, your hatred of free enterprise is showing and it’s not pretty.

Read the rest of Murphy’s article if you feel you must.  It can be summarized as follows: “Every one of my patients is entitled to free health care on demand, without regard to price, because I say so.”

It would be great if we could provide unlimited medical care to every man, woman, and child in America.  It really would.  But that’s unrealistic and a doctor like Murphy should know better than to get on his soap box and pretend that universal health care can be delivered without a massive transfer of wealth from the middle and upper classes to the poor and a corresponding reduction in the standard of care delivered to those who would be paying for the system.

If health care were part of the so-called “commons”, as air and water are, Murphy’s demand for universal health care would make sense.  But the truth is that medical care does not exist in elemental form.  Health care comes into being only through the study and labor of the best minds in America and these doctors and nurses deserve to be compensated according to the value they deliver to their patients.

This is the mechanism through which our most gifted people are attracted to the medical industry.  Remove it and the result will be a reduction in the quality and supply of health care to people who need it.  This has already happened in regard to Medicare patients, many of whom have to settle for substandard care because of the program’s cost restrictions and overhead.

Hoping to drum up an emotional response, Murphy hysterically cries that his patients are dying and that he could save them if we would only give him carte blanche with our health care dollars.

Unfortunately we’re all dying and it can’t be helped – it’s in our make-up.  No one’s like is truly saved by medicine, only prolonged.  In itself this is a noble goal and not to be diminished.  But it should be recognized for what it is, a short-term, earthly solution to the real problem, which is fear of eternity.

The Health Care Debate We’re Not Having