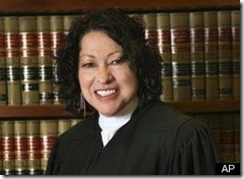 Is there no depth to which liberal ideologues will not stoop? It seems that some of Sonia Sotomayor’s more devoted advocates are preparing to aim a campaign of “scrutiny” at Frank Ricci, the New Haven, Connecticut firefighter who sued the city for promoting less-qualified minority firefighters at the expense of whites.

If they perform the same sort of murderous character assassination on Ricci as they’ve done in the past to Robert Bork and more recently to Joe the Plumber, and Sarah Palin, the dyslexic fireman won’t have a chance.

I understand that the left is ga-ga over the “wise Latina” whose life experience transcends the mere constitutional application law. I get that. However, politics is not a blood sport and Frank Ricci is not a competitor if it were. Liberals simply need to back off and let the process work itself through, without unnecessarily flaying another victim alive in the pursuit of their activist agenda.

Understand that Ricci’s recent victory in the U.S. Supreme Court must have left a bad taste in liberals’ mouths, refuting part of the premise behind Affirmative Action – that less-qualified minorities should be given employment and educational preferences – as it did.

Justice Kennedy, the current swing vote, had this to say about the fundamental issue of the case:

“Once . . . employers have made clear their selection criteria, they may not then invalidate the test results, thus upsetting an employee’s legitimate expectation not to be judged on the basis of race,” Justice Anthony Kennedy wrote for the majority.

Indeed, employers and universities must both be allowed to set their own standards and, having done so, enforce them without regard to skin color. Anything less is un-American and unconstitutional, as is the intentional targeting of innocent citizens as part of political warfare.

Ryan calls on Gianforte to apologize for assault, says election up to Montana voters