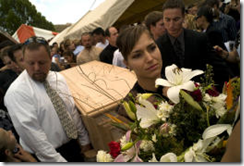 LeBaron previously ran afoul of the gangs after his younger brother was kidnapped this spring. Unable and/or unwilling to pay a $1M ranson, LeBaron demanded that the government act to root out the criminals terrorizing Chihuahua. His brother was soon released unharmed, but LeBaron’s killers were obviously unwilling to let things go at that.

Benji gave frequent interviews to local and national media in recent months, led other caravans to the capital calling for a crackdown on crime and attended the graduation of elite state police units.

He became a hero for the many in Chihuahua sickened by gangsters and violence.

“We have been afraid, haven’t known how to speak,” Alejandro Rodriguez, from a farm village a 2-hour drive from Colonia LeBaron, said at the men’s graveside Thursday. “We’ve suffered the silence of the good people.”

But fame made targets of both Benji and his community.

“He was so outspoken. That was the reason for this,” Nathan LeBaron, 58, who was directing the hundreds of cars arriving for the funeral, said of Benji. “If we hadn’t stood up they wouldn’t have bothered us.”

That may or may not be the case. The 3000+ dead in Chihuahua would disagree, I think.

LeBaron’s Mormon sect has a bizarre, even perverse history, as described in the article. Say what you will about that, Benjamin LeBaron exhibited the character and courage of a real man, one willing to risk everything to do what was right. For that he deserves to be celebrated – and emulated – by all of us, regardless of race, creed, or color.

It should go without saying that society has both the right and the ability to rid itself of drug pushers, kidnappers, rapists, and murderers. It should, but evidently we need occasional reminders. Criminals prey on citizens by isolating them and applying force and fear. Society should respond not by excusing criminals’ evil behavior but rather by banding together and applying even more force to rid itself of its abhorrent parts.

That was Benjamin LeBaron’s message and it would behoove us all to remember and act on it.

Referring to my last post about gun control, consider how Benjamin’s situation might have been helped if he’d been armed comparably to his attackers. Is the world a better place because he died and his killers roam free? Has his moral code somehow been proven stronger because he was murdered?

No. The end of his life is compelling, perhaps, in the form of a martyr’s narrative. But how much more compelling would his life story have been had he lived to carry the fight to gangsters and rid his country of the criminals that plague it?

Genarlow Wilson to be Freed