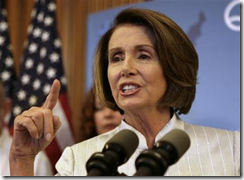 Maybe Nancy Pelosi had a bad encounter with her auto insurance company recently. Admittedly I don’t know the speaker’s motivations, but that’s as good a way as any to explain her spastic attack on health insurance companies earlier today:

“It’s almost immoral what they are doing,” Pelosi said to reporters, referring to insurance companies. “Of course they’ve been immoral all along in how they have treated the people that they insure,” she said, adding, “They are the villains. They have been part of the problem in a major way.”

Health care companies have been the villain in more than one end-of-life scenario in recent years. That’s not news. But are medical providers truly immoral organizations, corporations whose very existence demands that the government act to drive them out of business?

Hardly. They are simply the mutant offspring of a once-free marketplace whose internal structure was warped by the introduction of government regulation and massive spending programs whose cost controls and bureaucratic compliance burden served only to shift costs from group of citizens to another.

If looking for a scapegoat – as Pelosi and her fellow Democrats obviously are – one need look no further than the government’s interference in the market to identify the primary culprit behind the upward spiral of medical costs in this country.

Can we dig deeper? I think so. If one were honestly interested in defining the morality of actors in the health insurance marketplace, would not the concept of health insurance itself qualify as immoral?

No? Consider what insurance is: a conspiracy of a group of consumers to collude together to artificially lower prices for themselves while raising them for the non-affiliated masses. That’s really the same thing as stealing, when you think about it.

Or have I gone too far?

The Case for Universal Healthcare