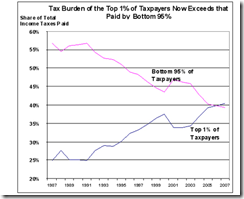 In a short, direct article Scott Hodge debunks one of the radical left’s essential talking points, namely that the American rich don’t pay enough taxes to support their poorer countrymen. On the contrary, the U.S. system is more liberal than any other country in the Organization for Economic Co-operation and Development (OECD):

Remarkably, the share of the tax burden borne by the top 1 percent now exceeds the share paid by the bottom 95 percent of taxpayers combined.

We are definitely overdue for some honesty in the debate over the progressivity of the nation’s tax burden before lawmakers enact any new taxes to pay for expanded health care.

An honest debate would be great. But the truth is, there’s nothing else to say.

The AIG Meltdown and Who’s to Blame