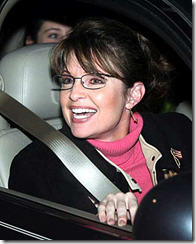 Sarah Palin isn’t one to mince words, it has become apparent.  Yesterday she postulated that Democrats’ health care reform proposals could lead to the formation of government-run “death panels”:

The America I know and love is not one in which my parents or my baby with Down Syndrome will have to stand in front of Obama’s “death panel” so his bureaucrats can decide, based on a subjective judgment of their “level of productivity in society,” whether they are worthy of health care. Such a system is downright evil.

That’s not the America that I know either.  I don’t even recognize it, to be honest, neither in the present nor in the likely aftermath of a Democratic victory in the health care debate.

On one hand she’s right – such a system would be downright evil because of it’s mandatory, authoritarian nature.  Such odes to emotional sterility produced the horrors of the Nazi death camps and Joe Stalin’s gulags.

On the other, it’s obvious that, however misguided the notion of a government-run health plan may be, it’s not Barack Obama’s intent to implement mandatory euthanasia for the defective and elderly.  Such statements simply aren’t true and don’t help the anti-reform protesters in the least.

Nevertheless, in the back of many people’s minds there lurks a not undeserved fear of government involvement in such matters.  When was the last time a government program actually reduced its scope?  The tendency for them to expand and become more and more intrusive is undeniable.

Despite Palin’s over-the-top language, there’s something in her words that resonates with people.  In the final analysis, we recognize that this is something the government has no business bulling its way into, regardless of present good intentions.