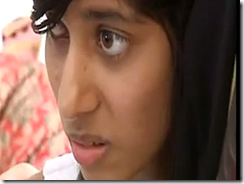 Hillary Clinton has arguably done more to combat sexual violence in Africa in her short time as Secretary of State than the entire U.N. has in the last decade.  Mrs. Clinton had this to say about visiting the Congo and witnessing the aftermath of the brutality of life there:

While I was in the DRC, I had very frank discussions about sexual violence with President Kabila. I stressed that the perpetrators of these crimes, no matter who they are, must be prosecuted and punished. This is particularly important when they are in positions of authority, including members of the Congolese military, who have been allowed to commit these crimes with impunity.

There are lessons that people in the U.S. and the rest of the civilized world can learn simply from reading this single paragraph.  We do not have to visit Africa and see the mauled and maimed women first-hand to realize that, whatever our differences politically, we really have a minimal number of problems to deal with in our lives and that it is our general adherence to the rule of law, with all of its compulsions and flaws, that creates the sense – and more than that, the reality – of security most westerners enjoy day in and day out.  Yet even here freedom and safety is not universal.  I’ll discuss below the latest court case regarding the practice of Islamic honor killings.

While abroad, Mrs. Clinton had some good news to offer the women of the Congo:

The United States will stand with these brave people. This week I announced more than $17 million in new funding to prevent and respond to gender and sexual violence in the Democratic Republic of Congo. We will provide medical care, counseling, economic assistance and legal support. We will dedicate nearly $3 million to recruit and train police officers to protect women and girls and to investigate sexual violence. We will send technology experts to help women and front-line workers report abuse using photographs and video and share information on treatment and legal options. And we will deploy a team of civilian experts, medical personnel and military engineers to assess how we can further assist survivors of sexual violence.

This is an achievement that deserves to be recognized.  Unfortunately, $17M will not go far in Africa and it will not go far enough to bring justice to the men who deserve its wrath.

Mrs. Clinton’s struggle for funds and for achievements on the ground is, if she hopes to win it, just beginning.  We should all wish her luck.  Of all the billions of dollars the Democratic Congress is spending on their pet projects and will continue to spend, none of them are more deserving that these few.

Such a fight is necessarily an uphill battle, as Riqba Bary seems almost certain to learn.  Bary, who is 17 and a former Muslim, ran away from her Ohio home in fear of her life after embracing Christianity and being baptized.  Now a court that surely must know better is apparently poised to force her to return to Ohio despite her desperate pleas to remain away from her parents.

Riqba’s reason?  She believes her parents will make her the latest victim of an Islamic honor killing.

“If I had stayed in Ohio, I wouldn’t be alive,” she said. “In 150 generations in family, no one has known Jesus. I am the first — imagine the honor in killing me.

“There is great honor in that, because if they love Allah more than me, they have to do it. It’s in the Koran”

I’ll leave the issue of Islamic theology aside for the moment to focus on the reality of Ms. Bary’s situation, which is that women and girls who reject their Muslim faith to live as they see fit in their new homes are frequently the subjects of horrific forms of ritualized violence at the hands of the men in their lives.

(It is immaterial whether the revenge beatings, rapes, and murders conducted by their fathers, brothers, uncles, and friends are mandated by the Koran.  The fact is that these misguided brutes believe that they are entirely justified in doing the worst possible things to women and girls who spurn their faith and their authority.

This pattern has been well established and documented by many sources, including the PoliGazette.)

Dr. Phyllis Chesler, an author and professor of psychology at the Richmond College of the City University of New York … said the tradition of such slayings is not fully understood by most Americans, including those in law enforcement.

That’s wrong.  Dead wrong.  Western law enforcement personnel understand the problem clearly, as does every American capable of reading a newspaper.  The issue is that the legal system lacks both the tools and the conviction to deal with this issue on the correct level, that of a defective sub-culture.

“She escaped from her family’s brutal tyranny and shamed her family further through public exposure,” Chesler said. “Muslim girls and women are killed for far less.”

As are so many of the women in war-torn Africa.  Hillary Clinton’s mission there is one that deserves our full-fledged support.  But we should also recognize that the same problem exists right here at home in the west.

The question is, what are you personally going to do about it?