Despite Democrats’ assertions that resistance to their massive spending programs and plans to create a taxpayer-funded healthcare program have been artificially generated, Sam Bates of Lubbock county, Texas, knows what he thinks about liberals’ agenda and he doesn’t like it.

A rancher, Bates took the figurative pen in hand and plowed the message “Say no to OBAMA” into the earth for all to see: 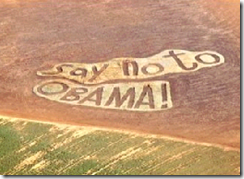 Lest you fall for the left’s tactic of racial politics, consider what Bates had to say about his missive:

You know, it’s not so much Obama, but just some of the things he’s done recently with the health bill he’s trying to pass through, and it’s just as much republican and democrats fault in the House and the Senate that won’t stand up to some of the things. That’s basically what’s frustrated me

None of this is about the fact that President Obama is a black man.  People have much greater concerns than that, namely the $7-9T that Democrats are planning to spend on their agenda items, the fact that they are lying about their healthcare plan being deficit-neutral, and the plan’s inevitable transfer of healthcare dollars away from the middle class.

SFWA, Scribd.com and ePiracy and why its important