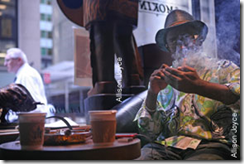 A recent Rasmussen poll showed that only 29% of Americans are confident that Congress knows what its doing with regard to the economy.  This isn’t a great number, obviously, but it’s higher than I would have expected.  Not surprisingly it’s liberals who make up the bulk of those comfortable with the Democrats’ handling of the economic situation.  But two small, unrelated incidents frame the fundamental problem with their big-government agenda.

The first act in our drama takes place in New York City, the original home of big government, where a cigar shop owner inadvertently ran afoul of the law by plugging in a coffee machine for his customers.

Indeed, this case exemplifies the paradox of big-government.  Despite its massive budgets and self-granted powers, government consistently displays little ability to adapt and provide useful, directed services to the people it should be serving.

Meanwhile, a new state law goes into effect in Texas tomorrow that forces all occupants of passenger vehicles to wear seatbelts – regardless of their age or location in the vehicle – and dictates that children up to 8 years old must be strapped in to safety seats.  Moreover, the new law also bans the use of cell phones in school zones and bars young drivers from using cell phones while driving.

Rep. Joe Pickett of El Paso says some drivers are going to have to change their behavior, but the changes aren’t too onerous and will save lives. Pickett leads the House Transportation Committee.

These are all good ideas, right?  So why complain?  In one respect, yes.  We shouldn’t gab on our phones while driving past a school dismissing its children and teenage drivers have no business using them except in emergency situations.  But do we need legal restrictions to force people to behave in legislatively determined ways?

Rep. Pickett’s opinion to the  contrary, we do not.  Like the Barclay Rex case, the new Texas law’s ridiculous provision requiring booster seats for 8 year-olds demonstrates the lack of common sense and perspective rampant in our state and federal legislatures.

Joe Pickett says the new law is not too onerous.  That’s one man’s opinion and an ill-considered one at that.  Needless to say, Pickett is a member of the Democratic party and an obvious supporter of additional state intrusions into the lives of every American.

Yet the last thing Americans need is expanded legalism on the part of an already overbearing, oversized, over-funded, and under-controlled government.

These cases are small ones and, as Pickett says, only mildly onerous burdens for citizens to bear.  But such burdens are noticed, if only at the subconscious level, and lead directly to a sense of malcontentedness in the minds of many voters.

Small wonder then that less than 1/3 of Americans have confidence in a Democratic Congress to deal with a real, complex issue and arrive at an efficient, appropriate solution at a time when a new, untested president is already proposing massive unfunded expenditures.

Perhaps, to paraphrase Luke, if state and federal legislatures were faithful with small matters such as these the people would grant them confidence to deal with larger matters.