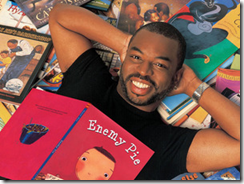 With Ted Kennedy and Dominick Dunne passing on this week you might think this article is about one of them but you’d be wrong.  No, the real tragedy of the week is the end of Levar Burton’s Reading Rainbow, the PBS show the Roots and Star Trek star used to pass on his love of literature to children all over the country.

Kennedy and Dunne have left a temporary void, but their shoes will be filled and most likely sooner rather than later.  Conversely, the Reading Rainbow, the 3rd longest-running PBS series of all-time, will likely not be replaced.  New techniques in reading education, it is believed, make Burton’s motivational techniques irrelevant.

…research has shown that teaching the mechanics of reading should be the network’s priority.

“We’ve been able to identify the earliest steps that we need to take,” [vice president for children’s programming at PBS Lisa] Simensky says. “Now we know what we need to do first. Even just from five years ago, I think we all know so much more about how to use television to teach.”

It should also be mentioned that the show’s whopping annual cost of “several hundred thousand dollars” make it non-viable in this new era of fiscal restraint in Washington.

I presume that Simensky means well.  For the record, using phonics as a reading education tool is a legitimate and important technique and the emphasis on it is not, in my opinion, misplaced.

However, for children to truly learn to read well they have to like doing it and that’s one outcome that your typical dry-as-dust phonics lesson will never achieve.  I’m afraid with that rather obvious fact has gone out of style.

Who is John Galt?